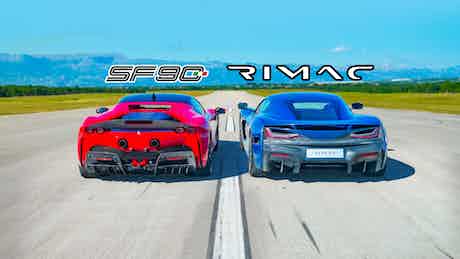 We’re pitting the brand-new Rimac Nevera against the Ferrari SF90 Stradale for a hypercar drag race today. Watch to find out which comes on top…

In a world-first, carwow has got its hands on the newly revealed Rimac Nevera. It’s not an opportunity we’ve squandered, either.

A full review on the electric hypercar is coming soon, but before that, we’ve brought along one of its hottest alternatives to see just how quick it really is.

The Nevera uses four electric motors, one on each wheel, to produce a monstrous 1,914hp and 2,300Nm of torque. Officially, it’ll do 0-60mph in a shade under 2 seconds and go right on to a 258mph top speed.

That, on paper at least, makes the Ferrari SF90 Stradale seems comparatively pedestrian.

Check out the best EVs on sale

It uses a near-identical 4.0-litre twin-turbocharged V8 to that found in the F8 Tributo, albeit linked up to three electric motors to produce a combined 1,000hp and 800Nm of torque. It seems slow in the context of things here, merely managing 0-60mph in 2.5 seconds before topping out at 211mph.

Of course, these numbers don’t mean anything unless you see the two in action. Which you can do right now in today’s drag race. You might even witness a world record for your trouble…

Want to know more in-depth info about the new Rimac Nevera? Well, here’s a quick summary of its clever design details, impressive electric technology and of course its staggering performance.

The Rimac Nevera may look pretty familiar. Well, that’s because you’ve likely seen it before as the C_Two — its initial concept form. Not a lot has changed about the car really since then, though its new name is a lot more memorable…

Though it may create images in your head of a Nissan Navara, Nevera is actually a Croatian name for a ‘mighty and unexpected’ storm. Quite apt if you’re not ready for the level of performance on offer.

It keeps that flat-nosed front end of the C_Two though, along with a pretty fuss-free rear. Although, you will spot an active spoiler back there that works to improve downforce or lower drag, dependent on if you’re cornering or putting the hammer down for a straight.

Sitting at each corner of the Rimac Nevera is an electric motor, with the four combining to produce a monstrous 1,914hp and 2,300Nm of torque.

That results in an official 0-60mph time a shade under two seconds, before sending the electric hypercar all the way on to 258mph. All in near-silence.

You can order a Rimac Nevera right now if you’d really like. You’ll want to be quick though, as just 150 of them are going to be made. Oh, and you’ll need a cool £1.73m lying around for it.