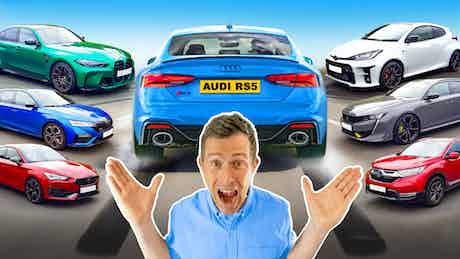 Check out today’s video for a quick fire review of all our long termers. Plus, Mat’s going to launch them all just for good measure.

Here at carwow we currently have a fleet of 9 long term test cars. In today’s video Mat’s going to review all of them before timing them from 0-60mph and over the standing quarter mile.

You will have seen our BMW M3 Competition in a lot of our recent drag races. Its twin turbocharged 3.0L straight six engine means it performs well down the ¼ mile. We’re fond of the Isle Of Man Green paint as well, made even better by the fact it’s a no cost option.

Moving on to something more family friendly, we have the Honda CRV Hybrid. Ours is the top of the range EX model, meaning it gets luxuries such as a panoramic glass roof, power tailgate and electric seats. It has a 2.0 litre petrol engine mated to an electric motor giving it 185hp.

The Cupra Leon is a great hot hatch thanks to its 2.0-litre turbocharged engine producing 300hp. We like this car’s sharp styling both inside and out, plus it’s easy to live with thanks to a roomy cabin and good sized boot. It’s just a shame there’s no manual gearbox option.

Next up we have the Volvo V90. Our car is the T6 Recharge, meaning it’s a plug-in hybrid. It has a 2.0-litre petrol engine paired with an electric motor to produce 253hp. The Volvo is supremely comfortable, but the jury’s still out on the Maple Brown paint.

Our Skoda Octavia vRS Estate has a similar 2.0-litre turbocharged engine to the Cupra Leon, only here it has 245hp. It has plenty of space for people and their luggage, as well as being quick and comfortable to drive.

The Audi RS5 Sportback is a quick and practical daily driver. It has a 2.9-litre twin-turbo V6 engine with 450hp and Audi’s Quattro all-wheel-drive system, so it can get off the line quickly. Ours is a Vorsprung model, meaning it has extras like a big sunroof and premium sound system.

The new Vauxhall Mokka is much more exciting to look at than the old model thanks to its angular nose and bold creases. Our Mokka has a 1.2-litre turbocharged engine producing 130hp. The interior is a nice place to be as well, with two large screens dominating the dashboard.

If you want a good looking performance estate, but don’t want anything too obvious, then you’ll like our Peugeot 508 SW PSE Hybrid 4. It has a 1.6-litre petrol engine and two electric motors with a combined 360hp. We also love the way this thing looks.

Last but certainly not least, we have the Toyota GR Yaris. It has a 1.6-litre three-cylinder turbocharged engine with 257hp and all-wheel-drive. Our car also has the Circuit Pack, meaning it has front and rear limited slip differentials and tuned suspension, making it a riot to drive.

So what does Mat make of our fleet of cars? Watch the video to find out, and also to see them all get launched.