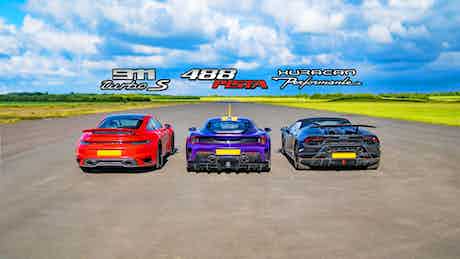 It’s a battle of the heavy hitters as the reigning carwow drag-race king, the Porsche 911 Turbo S, takes on the Ferrari 488 Pista and Lamborghini Huracan Performante.

Tap the video below to watch the race.

On paper, at least, the spec of the Porsche 911 Turbo S isn’t all that impressive. Its twin-turbo, 3.8-litre flat-six engine produces 650hp and 800Nm of torque, which is hardly earth-shattering these days. And it weighs in at a not inconsiderable 1640kg.

But, Porsche’s engineers have calibrated the eight-speed dual-clutch gearbox, four-wheel-drive and launch control to fire the thing off the line like the proverbial bullet from a rifle. The way it launches is never less than astonishing.

The noise that comes out of the Lambo’s exhaust is pretty astonishing, too. But then you would expect that of the only naturally aspirated car here. The Huracan Performante’s 5.2-litre V10 engine produces 640hp and 600Nm, which is sent to all four wheels via a seven-speed dual-clutch gearbox. It tips the scales at 1507hp in Spyder guise, as we have here.

The Ferrari is the lightweight of the group, at just 1385kg. Just 220hp would move that kind of mass smartly enough, never mind the 720hp produced by the 488 Pista’s 3.9-litre twin-turbo V8. Its 770Nm is more than ample, too. But, crucially, it’s only rear-wheel-drive, not four-wheel-drive. So it could struggle get all that power down off the line.

So, what’s going to happen? Can the Pista’s towering power-to-weight ratio knock the 911’s drag race crown off its head? Will the Huracan’s wall of noise give it an afterburner-like boost? (No!) Or will the 911 simply blow the others into the weeds, as per usual?

Watch the video to find out.