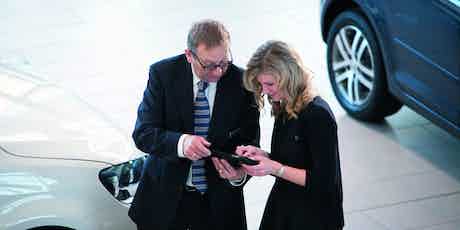 The UK is proudly bucking the European motor industry’s downward trend. 2014 has seen the most new car registrations since 2004, well before the recession. In fact, the UK is the second largest market in Europe for new cars, only losing out to Germany.

Some 2,476,435 new cars were registered in the UK in 2014 – 9.3 per cent more than in 2013 and around 5.7 per cent ahead of the European average. SMMT chief executive Mike Hawes said “pent-up demand from the recession years combined with confidence in the economy saw consumer demand for the latest models grow consistently and strongly”.

According to Hawes, hybrid, electric and plug-in vehicles saw sales quadruple due to “increased choice, coupled with a growing desire for reduced costs and greater efficiency, result[ing] in a quadrupling of plug-in car registrations over 2013”. This trend is set to continue in 2015 as the range of alternative-fuel vehicles increases.

Many manufacturers including BMW, Mini, Vauxhall, Mazda and Subaru all had record years for sales but it was MG who achieved the biggest growth. The Midlands-based brand has had a rocky time of late but scored a 361 per cent increase in sales in 2014 – though, having sold just 384 cars in 2013, that wasn’t going to be too tricky. It’s a promising start for the reborn company, however.

Ford’s Fiesta and Focus took the top two places in sales with the Vauxhall Corsa and Volkswagen Golf close behind. Keeping with the recent trend in the market the majority of cars sold were diesels (50.1 per cent), with 47.8 per cent petrol and the remaining 2.1 per cent were alternative fuel vehicles. We predict this balance to shift towards petrol-engined models in 2015 as fuel prices decrease and more efficient and powerful small petrol units come onto the market.

Leasing and van sales also up

Leasing figures from the British Vehicle Rental and Leasing Association are consistent with the SMMT’s data, and the organisation’s Chief Executive, Gerry Keaney, said: “New fleet registrations hit a seven-year high, up nearly nine per cent on 2013, and we saw consistent growth in the fleet leasing sector, with volumes up around 6 per cent”.

There were also 363,155 commercial vehicles sold in 2014, the highest number since 2007, representing a 11 per cent increase over 2013. Truck sales slowed as Euro 6 emissions standards came into force but van sales grew significantly, generating a net gain.

What happened last time sales were this strong?

The UK car industry hasn’t looked this rosy since 2004. Back then, Eminem released

Natasha Bedingfield put out These Words and Britney Spears caused controversy with her raunchy ‘Toxic‘ video.

Harry Potter and the Prisoner of Azkaban, The Incredibles and Million Dollar Baby all hit the big screen while Friends left the little one. Battlestar Galactica, House and Lost all began in earnest when they weren’t being sidelined for the Athens Olympics.

On the roads, the second-generation Ford Focus was released along with the fifth-generation Volkswagen Golf and the very first Ford GTs began rolling off the production line – presumably in a very noisy manner.

Why not check out our car configurator and see how much you could save on your next new car. Or, for more in-depth analysis of manufacturers’ 2014 sales take a look at our winners and losers of 2014.