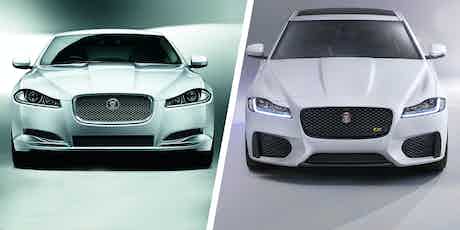 Jaguar has revealed the XF saloon, but how does the Audi A6 and Mercedes E-Class rival compare to its illustrious predecessor?

When the first Jaguar XF was revealed in 2007, critics were taken aback. Here was a modern looking car with an up-to-date drivetrain and an interior that looked like it belonged in the 21st century – nothing, then, like Jaguars of old. Now, Jaguar has revealed the XF’s replacement and, for fans of the old car, little has changed.

It’s tricky to tell what’s been upgraded for the second generation unless you hold images of both side-by-side. Thankfully, that’s exactly what we’ve done to help you make sense of the evolutionary updates to Jaguar’s Audi A6, Mercedes E-Class and BMW 5 Series rival.

At the front, there are no new details to the XF’s styling – it’s only been reshaped. This has worked, however, because the wider, more gaping grille has a much more menacing look that’s certain to send middle-lane hogs scattering. Air intakes below the grille are now wider and more squared. Refreshed headlight units are similar in shape to the old ones but house new full-LED lighting elements – a first for the brand.

Although it looks very similar to the outgoing car, the body is based on Jaguar’s entirely new aluminium-intensive architecture meaning it sheds up to 190kg compared to the old XF. Jaguar also reckons the XF is up to 80kg lighter than its nearest rivals. It’s actually 7mm shorter then the old car and 3mm lower but, thanks to clever packaging and a 51mm longer wheelbase, it still manages to give passengers more room to stretch out than the old one.

At the back, new brake light units echo the ones used on the XE. Overall, the Jaguar design team adhered to the “discipline of simplicity” and ensured nothing was “superfluous” according to Ian Callum, Jaguar’s Director of Design. It’s all geared towards giving an impression of a “clear sense of calm and strength”.

Jaguar is claiming ‘segment-leading figures’ for the cabin so it should be capacious enough to accommodate even the portliest of families. The overall layout hasn’t changed that much – the cabin is still dominated by rectangular elements but everything has been updated. A new infotainment screen featuring Jaguar’s latest software means accessing music, Bluetooth and other functions is easier than in the old car.

Behind the wheel, buyers will notice the traditional dials have gone the way of the Dodo and have been replaced with a 12.3-inch TFT screen – much like the Mercedes S-Class and Audi TT. As with all Jaguar interiors, a ‘seamless blend of contemporary luxury materials and finishes’ ensures if feels as posh as it looks.

This was one area where the old XF had some catching up to do – none of its engines were terrible but, compared to the ultra-modern units in Audis and BMWs, they were decidedly old-school. The worst offender was the 2.2-litre diesel shared with a Ford Transit van. The good news for the new car is it’s chucking these away in favour of Jaguar’s new Ingenium turbocharged engines.

It’s so far been confirmed that the 2.0-litre turbodiesel motor will make its way under the XF’s bonnet in 161 and 177hp forms. The former (probably badged ‘XF-E’) will be offered with a new six-speed manual but all other engines will use the well praised eight-speed automatic. A 3.0-litre twin-turbodiesel with a supercar-worrying 516lb ft of torque will be offered along with a 375hp 3.0-litre supercharged petrol borrowed from the F-Type. An ‘R’ will almost certainly join the line-up later on with a big V8 and it’ll be very, very loud – and very, very lovely.

Perfect 50:50 weight distribution between front and rear axles and carefully tuned power steering and dampers means the XF should be as comfortable and agile as it always was. Adaptive dampers are offered as an option to further improve ride quality and Jaguar’s All-Surface Progress Control means the rear-wheel-driven XF generates optimum traction even in adverse conditions. It’s not been confirmed but four-wheel drive is expected as an option.

Standard levels of equipment in this market sector tend to be fairly generous so we don’t expect the standard XF to come without most of the essential equipment. We’d be very surprised if Bluetooth, DAB radio, aux and USB input, and cruise and climate control weren’t included as standard.

The infotainment screen looks to be one of the best in the business because it runs a quad-core processor – this was a weakness of the old XF. It also features Jaguar’s clever Dual View technology allowing the driver to see sat-nav instructions and the passenger to watch a movie – on the same screen!

Like every new car these days, the XF will come with the requisite raft of safety equipment to either stop you having a crash or, if you do have one, to minimise the amount of damage. We expect it to feature lane-keeping assistance, autonomous braking and adaptive cruise control at the very least.

Jaguar has been working on tech that uses audio and visual warnings to prevent you crashing into obscured obstacles or opening the door into the path of cyclists. It’s also working on augmented reality solutions to navigation instructions to make driving to new places even easier.

Full details will be released at the New York Motor Show and we expect the new XF to go on sale towards the end of 2015. We don’t expect prices to change much for the new XF so it should cost from just over £30,000 up to around £55,000. Big discounts will probably be offered on the old XF until that point so buyers looking for a bargain might want to strike now.

Check out our full review of the old XF to see where the new car need to improve and have a look at our reviews of its rivals – the Audi A6 and the Mercedes E-Class. Don’t forget to check out our deals page for our latest discounts and our car configurator to see how much you could save on your next car.