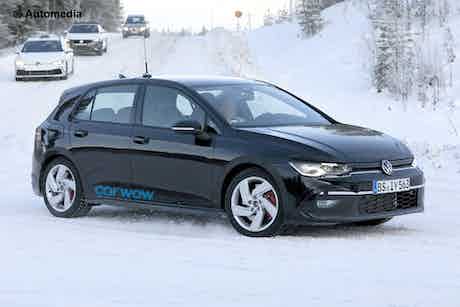 The dust has barely settled on the launch of the Mk8 Golf and now we have pics of the model you’re really interested in – the new GTI. Here’s what you can expect from the latest version of the original hot hatchback.

You can expect the new GTI to have a more aggressive design than the car it replaces – something that seems to be borne out by our pictures, which a prototype being winter tested in the Arctic Circle.

Upfront, stickers on the tops of the headlights disguise a more intricate design made possible by its exclusive use of smaller LED bulbs, and that sticker extends across the grille. Peel that away and you’ll find a trademark GTI red strip. There’s, even more, to talk about when your eyes drop to the lower bumper where you’ll see a chicken-wire centre section, which limits resistance as a cooling wind is forced through to the car’s radiator.

This air of go-faster sophistication carries over to the sides of the car where you’ll see some subtle side skirts and red brake calipers, while the small alloy wheels (on this winter-tyre-shod) prototype will be swapped for a larger design when the car hits your local showroom. Finally, around the back, you’ll see the Golf’s distinctive new taillights, a new rear spoiler and a customary pair of exhaust pipes.

At the other end of those exhausts, you’ll get a revised version of the same 2.0-litre, turbocharged petrol engine that’s fitted to the current model tuned to produce 250hp (standard) or 290hp (in the TCR car which replaces the current Performance model). In the latter guise, the new GTI will get from 0-62mph in under six seconds and will have a top speed that’s limited to 155mph.