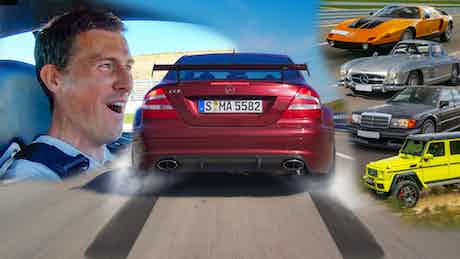 Some classic cars spend their days relaxing in museums or being mollycoddled by collectors, but Mat’s convinced Mercedes to let him launch some of their rarest and most expensive models to see how fast they are.

So how do they measure up? Tap the video to find out.

Let’s start with the 1955 300SL. This is one of the most famous Mercedes ever made – partly thanks to its 215hp 3.0-litre straight-six engine, but mostly because it has gorgeous gullwing doors. It also has a manual gearbox, so Mat will have to be careful when launching this near-priceless piece of automotive history.

The next car Mat’ll test is another gull-winged wonder. This time, the ultra-rare 1970 C111. This was built as a test-car by Mercedes and came with tiny rotary engines, bulky diesel units and, in the case of this car, a 200hp 3.5-litre V8 with a dog-leg manual gearbox.

The C111 never officially went on sale, but that didn’t stop some wealthy petrol heads handing Mercedes blank cheques to make sure they got their hands on one of the 13 prototypes. Reportedly, they ended up handing over more than £30 million!

After all that gearshifting-induced stress, Mat probably deserves a rest. So, it’s fitting that the next car is an uber-luxurious Mercedes 600 Pullman with a 6.3-litre 250hp V8. It’s a limousine so, naturally, Mat will take a back seat. But, even with one of Mercedes’ professional drivers behind the wheel, this colossal cruiser can’t be that fast, can it?

The Mercedes 230 E had the competition licked in terms of build quality when it came out in the eighties – no wonder they sold more than two million of them. It has a modest 136hp 2.3-litre petrol engine and a three-speed gearbox, so it probably won’t be the fastest car here…

Touring car racing has produced some of the wildest limited-edition saloon cars ever, such as this 1990 190 E Evolution. This body kit-clad four-door comes with a 235hp turbocharged 2.5-litre engine, track-focused suspension and a dog-leg manual gearbox, so it’s ideally suited to fast launches – so long as Mat nails his gear shifts…

The last luxury option Mat will try is the 560 SEC from the nineties. This two-door coupe packs a 5.5-litre V8 with 300hp but it’s designed to be comfortable rather than hard-core. Will its soft suspension and automatic gearbox hold it back, or does it have a surprise up its super-posh sleeve?

The nineties-tastic 190 E Evo isn’t the only touring-car-inspired rocketship Mat’ll be testing. He’ll also put the CLK DTM AMG Coupe through its paces. Unlike the 190 E, this comes with an automatic gearbox with launch control, but its 5.5-litre supercharged V8 produces 582hp, so it’s still going to be a handful off the line. Mercedes only built 100, so no pressure Mat…

Back in 2009 when Mat was a budding motoring journalist, he always wanted to get his hands on a CL 65 AMG. You can’t blame him really, it looks great and comes with a 6.0-litre twin-turbo V12 with 612hp. Well, his time has finally come, but how will this classy coupe fare against race-bred competition?

It’s no secret that Mat loves a G Wagon. And, the ultimate G has got to be the ludicrous 2018 G500 4×4². This lime-green giant gets a 4.0-litre twin-turbo V8 with 422hp and a set of jacked-up portal axles that give it enough ground clearance to make crossing the Sahara look like parking in a kid’s sandpit. But it weighs three tons. So, how quick is it? Watch the video to find out.

Compare the latest Mercedes deals available through carwow or check out the best sports cars on sale now.