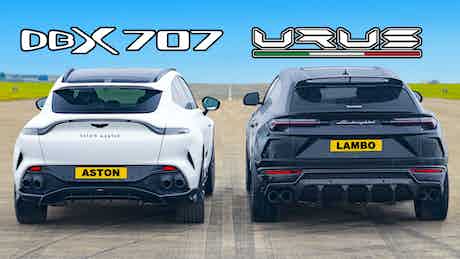 The new Aston Martin DBX 707 is supposed to be the quickest, fastest and most powerful production SUV on sale. There’s only one way to put that to the test – in a quarter-mile drag race against the all-conquering Lamborghini Urus.

Tap the video below to watch the race…

The ‘normal’ Aston Martin DBX is already one of the most exciting SUVs on sale, but this new version turns things up to 11 (or should that be 707?)

See the fastest SUVs on sale

Torque sits at an equally staggering 900Nm – or 200Nm more than the standard car. To handle this extra grunt, Aston’s engineers gave the 707 a new nine-speed automatic gearbox with an especially beefy wet-clutch instead of a normal torque converter. Like the normal car, this power is sent to all four wheels.

The Lamborghini Urus uses a similar recipe to the Aston – a big V8 engine, an automatic gearbox and four-wheel drive – but starts with subtly different ingredients.

For example, its 4.0-litre twin-turbo engine pumps out ‘just’ 650hp and has to make do with 850Nm of torque. The automatic gearbox is a touch milder, too – it uses a conventional torque converter and only musters eight gears to the Aston’s nine.

Both cars will set you back the bones of £200,000 (once you’ve added a few tasty options, that is) and tip the scales at more than two tonnes. But, which will be the quickest in carwow’s signature quarter-mile dash? You’ll have to watch the video to find out…

Check out the latest offer on a range of new cars or see how much you could get for your current wheels when you sell your car through carwow.