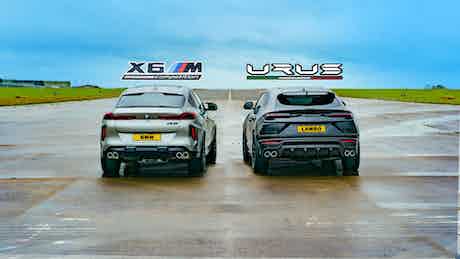 The BMW X6M Competition and Lamborghini Urus are two of the fastest super SUVs money can buy — but which of these bull-sized brutes will come out on top?

Pitting together a Lamborghini against a BMW in a drag race would’ve seemed a little bonkers only a few years ago.

One is a renowned builder of ballistic supercars and the other a mainstream posh carmaker that makes the occasional super saloon. Both, however, build a high-riding, high-performance SUV, so it makes perfect sense the pit them head-to-head.

It may surprise you that this isn’t actually the first Lambo SUV — the honour goes to the utilitarian LM002 of the ‘80s — but there’s no arguing its possibly the most important car to the brand.

See, it’s here to cash in on the craze of big posh SUVs so it can keep building things like the Aventador for years to come. That’s not to say it’s dull, though — it does have a raging bull of a twin-turbocharged 4.0-litre V8 that’ll send 650hp and 800Nm of torque to all four wheels.

The BMW X6 M we have here should still give it a serious run for its money, though. Its V8 is slightly larger at 4.4-litres, but does produce less power (although 625hp and 750Nm are not to be sniffed at.)

Both use eight-speed torque convertor automatic gearboxes, and both weigh more than two bulls each — the X6 M tips the scales at 2,370kg and the Urus a bit less at 2,199kg.

On paper, the win looks to be leaning towards the Lamborghini Urus. It’s never quite that simple though — can the BMW X6 M throw up a surprise in the carwow drag race, rolling race and brake test? You’ll have to watch the video to find out…