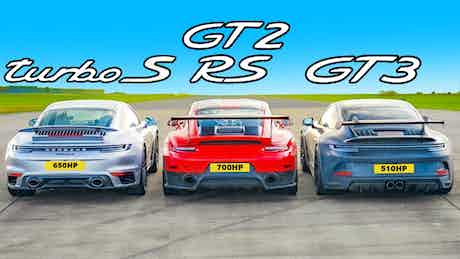 There are a lot of variations of the Porsche 911, so today we’re going to pitch a few of them against each other to see which is fastest.

First up, we have the latest Porsche 911 Turbo S. It has a 3.8-litre twin-turbocharged flat-six with 650hp and 800Nm of torque. It also has all-wheel-drive and an eight-speed dual-clutch automatic gearbox. It’s quite heavy, weighing in at 1,640kg.

Next up, we have the oldest car here. The Porsche 911 GT2 RS also has a 3.8-litre twin-turbocharged flat-six engine, but here it produces 700hp and 750Nm of torque. This goes to the rear wheels via a seven-speed dual-clutch automatic gearbox, and thanks to its lack of all-wheel-drive it tips the scales at 1,470kg.

Check out the best sports cars on carwow

Finally, we have the Porsche 911 GT3. It produces 510hp and 470Nm of torque from its 4.0-litre naturally aspirated flat-six engine. It has a seven-speed dual-clutch automatic gearbox and RWD, plus it’s the lightest car here at 1,435kg.

So which will prove to be the ultimate Porsche 911? You’ll have to watch the video to find out.