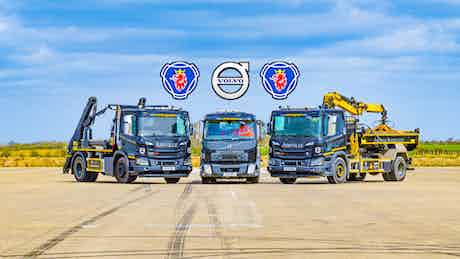 But this is a valid test. After all, lorries generally need to carry a whole lot of stuff from where you are to where you want it to be. Preferably as quickly as possible and with a minimum of expense.

It’s also a battle for Swedish honours as Scania takes on Volvo. Much is at stake.

So, step forward the Scania 4×2 skip lorry. This launches into battle with 9.0 litres of undiluted diesel venom behind that massive front grille. The six cylinders generate 250hp, which is the sort of figure a relatively warm hot hatch makes these days.

It drives the four wheels (in two pairs) on the rear axle, so traction shouldn’t be much of an issue.

There’s another Scania 4×2 in this race, too. This one has a big old grab arm on the back, but it also gets a 9.0-litre engine – albeit one with a slightly more mighty 280hp output.

On the face of it, the third contender – the 4×2 Volvo concrete pump lorry – is going into this fight at a bit of a disadvantage. It only has a mere 5.0 litres to play with, but that engine still generates 210hp, so isn’t far off in terms of power.

And it’s a bit of a flyweight, because where the Scanias weigh 18,000kg, the Volvo is a third less, at 12,000kg, which should help it to get off the line a bit smartish.

So, which of the heavy-duty workhorses will be the fastest to the building site? You’ll need to watch to find out…

Drag race: Mitsubishi Evo VI Vs Subaru Impreza P1
New BMW 3 Series revealed: prices and specs confirmed
How is the Russian invasion of Ukraine affecting the global car industry?
Peugeot Allure trim: What is it and is it worth it?
Drag race: Audi RS5 vs BMW i4 M50
Understeer vs oversteer: What’s the difference?
Lamborghini Aventador generations drag race
Pedestrian crossings in the UK explained
10 of the best drift cars
Volkswagen Passat vs Audi A4
Skoda Laurin & Klement (L&K) trim: what is it and is it worth it?
How long do electric car batteries last?
Types of speed camera in the UK
Drag race: Tesla Model 3 vs Lamborghini Urus
What is the Mini Chili Pack? Is it worth it?