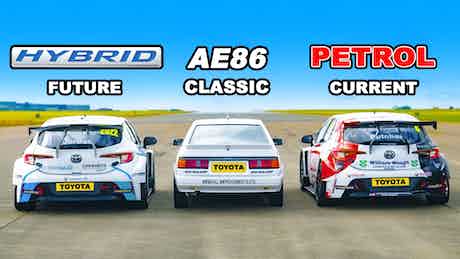 Today we have a reminder that Toyota builds more than sensible family hatchbacks, as we drag race three racing cars from the British Touring Car championship.

First up, we have last season’s 2021 Toyota GR Corolla BTCC car. It has a 2.0-litre turbocharged four-cylinder engine that produces 370hp and 400nm of torque. This power is fed through a 6-speed sequential manual transmission via the front wheels. It’s not just powerful, but light too – weighing just 1270kg.

Next we’re lining up the 2022 Toyota GR Corolla BTCC car. On initial inspection, it seems evenly matched to the 2021 car. It weighs the same, has the same engine and the same power figures. It does have a secret weapon however; a 40hp electric motor that can provide a 15-second burst of extra power.

Last but not least, we thought we’d invite Grandad along. This 1986 Toyota AE86 Corolla is a replica of a BTCC winning car. It has a 1.6-litre naturally aspirated engine with 192hp and 190nm of torque. Power goes to the rear wheels through a 5-speed manual gearbox.

So can the old timer show the kids a thing or two? You’ll have to watch the video to find out.