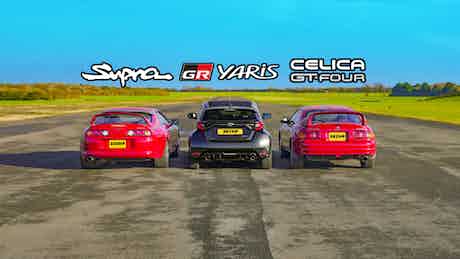 Toyota has gone from making many sensible and efficient (but also rather dull) cars for the last decade or so to building some seriously cool cars.

Take the reborn Supra for example, or its latest hot hatch — the Toyota GR Yaris.

Catering to the petrolheads isn’t new ground for Toyota though, rather it’s made some of the most iconic Japanese performance cars ever. How does the old guard square up to the new generation, though?

Read the review of the new Supra

Well, that’s what today’s drag race looks to find out. We’re squaring up the GR Yaris to the iconic A80 Mk4 Toyota Supra and another rally homologation special – the Toyota Celica GT-Four.

The newest of the lot (by a good two decades) is the Toyota GR Yaris. It’s powered by a 1.6-litre, turbococharged three-cylinder engine that sends 261hp and 360Nm of torque to all four wheels through a six-speed manual gearbox.

The Celica GT-Four is rather close in spirit. It uses a 2.0-litre, turbocharged four-cylinder engine that’s good for 252Nm and 304Nm.

Like the GR Yaris, it’s equipped with four-wheel-drive, though it sends its power through a five-speed manual gearbox. It’s heavier than the hatch as well, coming in at 1,390kg.

Then there’s the might of the Supra. This Japanese import uses the 3.0-litre ‘2JZ’ twin-turbocharged straight-six engine that’s good for 320hp and 440Nm of torque.

It has got the power advantage over the other Toyota machines, though has a relatively sluggish four-speed automatic gearbox with power sent purely to the rear wheels. And, it’s a bit of a heavyweight, tipping the scales 1,490kg.

So, will classic performance cars keep the crown over the new kid on the block, or will the Toyota GR Yaris show that the future is now, old man?

Watch to find out…

10 best cars with a high driving position
Drag race: Mitsubishi Evo VI Vs Subaru Impreza P1
New BMW 3 Series revealed: prices and specs confirmed
How is the Russian invasion of Ukraine affecting the global car industry?
Peugeot Allure trim: What is it and is it worth it?
Drag race: Audi RS5 vs BMW i4 M50
Understeer vs oversteer: What’s the difference?
Lamborghini Aventador generations drag race
Pedestrian crossings in the UK explained
10 of the best drift cars
Volkswagen Passat vs Audi A4
Skoda Laurin & Klement (L&K) trim: what is it and is it worth it?
How long do electric car batteries last?
Types of speed camera in the UK
Drag race: Tesla Model 3 vs Lamborghini Urus