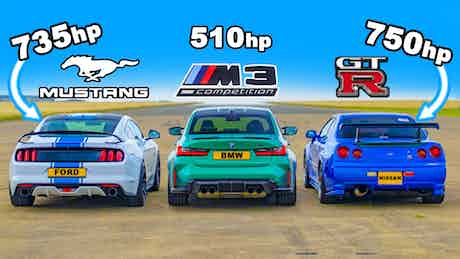 Right, this is a big one — and by big, we mean both the cars and the power outputs. Also; the cultural significance. This is old world versus new world versus Bushido culture. This is Japan versus America versus Europe. And all three are bringing out their big guns…

Sat under a fluttering Stars & Stripes is a Ford Mustang but not, as you’ll probably have gathered, just any old Ford Mustang. This one — nicknamed King Cobra by its owner — has been tuned and tweaked to produce a massive 735hp and 690Nm of torque from a supercharged version of its 5.0-litre ‘Coyote’ V8 engine.

If nothing else, this thing is going to be wildly proficient at turning deceased dinosaurs into world-ending levels of noise. It is, of course, rear-wheel drive and sending its power aft through a six-speed automatic gearbox.

Stepping up from the red, yellow, and black-striped corner, for the glory of Germany, is the new BMW M3 Competition. OK, so it’s not pretty to some, but it is fast, thanks to a 510hp turbo straight-six engine, and 650Nm of torque. All of that is sent to the rear wheels via an eight-speed automatic gearbox. Could the BMW, with all its glorious motorsport heritage, put one over the Mustang?

Well, it might, but it has to get past The Tokyo Terror first — a Nissan Skyline GT-R, in iconic R34 form (that’s the boxy-looking one from all the classic PlayStation games).

As with the Mustang, this one does not fall into the ‘just any’ category. It too has been tuned, with its RB26 inline-six engine bored out to 2.7-litres and switched to a single turbocharger. It has, insanely, even more power than the Mustang — 750hp, and 800Nm of torque — and it’s the lightest car here at 1,560kg. That’s 170kg lighter than the M3. The catch? It’s the only car here with a manual gearbox, which means it might struggle when it comes to gearchanges…

This one is for the ages, folks. Lay your (just for fun) bets now…