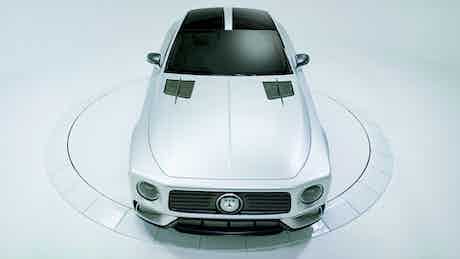 This is the WILL.I.AMG GT W1X – a one-off Mercedes-AMG GT 4-door customised by the former Black Eyed Peas frontman, will.i.am. Don’t book an eye test – it’s supposed to look like that…

To say it’s a heavily modified AMG GT 4-door would be an understatement. Will.i.am’s latest self-titled automotive experiment started life as an AMG GT 4-door, before it was given a G63 face transplant courtesy of the spanner-happy mechanics at West Coast Customs.

Sound familiar? The team responsible for this four-wheel face swap became famous in the early 2000s for building some ‘questionably’ customised cars as part of MTV’s Pimp My Ride TV show.

The WILL.I.AMG is a far cry from that show’s usual diet of nineties saloons, SUVs and minivans, however.

Squint (quite a bit) and you can just about see the family resemblance in the new car’s silhouette, simple horizontal lines and bonnet-mounted air vents.

Speaking of which, beneath that colossal bonnet sits a 4.0-litre twin-turbo V8 that comes straight from the AMG GT 4-door donor car.

How much power it makes hasn’t been confirmed, but will.i.am said he ‘didn’t touch the engine’. If Mercedes was feeling generous enough to give him a top-spec GT 63S model to play with, that means this elaborate one-off produces 639hp.

There’s also a chance that the concept car is based on a brand-new 843hp AMG GT 63 S E-Performance Hybrid; one of the most powerful Mercedes cars ever built, and a stand-out performer in the long-name stakes, too.

Either way, if will.i.am hasn’t meddled with the car’s engine, he probably didn’t mess around with its gearbox or four-wheel-drive system, either.

As a result, the WILL.I.AMG is likely to have a nine-speed automatic gearbox with a seriously impressive launch control system. Watch how an unmodified AMG GT 4-door performs in the drag-race video, below.

One obvious modification is the car’s new doors. The standard AMG GT 4-door has, unsurprisingly, four doors. The WILL.I.AMG, however, has two massive doors with reverse hinges – like those on a Rolls-Royce Wraith.

Official images of the car’s interior haven’t been released yet, but it appears as though the WILL.I.AMG comes with two seats in place of the AMG GT 4-door’s five, and a new two-piece glass roof with a silver central spine.

If this oddball combination of AMG GT and G-Class takes your fancy, don’t start warming up your chequebooks yet. AMG has confirmed (in a reply to comments on its Instagram page) that this new car will not go into production. A shame (perhaps.)

Check out how much you can save on a range of new Mercedes-AMG cars, or see how simply you can sell your current car with carwow. Just tap the button below to get started.