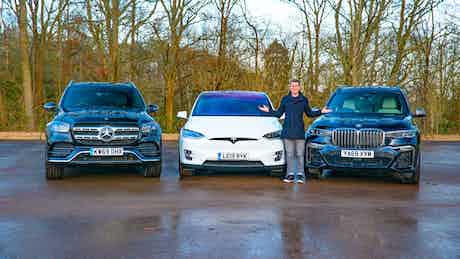 We’ve got our hands on three upmarket seven-seat SUVs to find out which is best. See our in-depth video review now

The Mercedes GLS, BMW X7 and Tesla Model X are three large, seven-seat SUVs with an upmarket vibe and lots of tech. Their prices all start at between £70,000 and £90,000, but just what are you getting for such your money? Join Mat Watson for his in-depth comparison below:

In the video, Mat puts this trio of SUVs through the ultimate test. He reviews their designs (inside and out), infotainment, practicality, driving proficiency and – of course – their all-out speed before deciding which car has nabbed the well-earned victory.

You can tap on the video above now to watch and get Mat’s verdict. However, if you want to learn more about each of these models before you see them clash head-to-head, read on.

The car has been kitted out with Mercedes’ dual-screen MBUX infotainment system. This setup effectively twins the dashboard-mounted touchscreen with the digital driver’s display. You also get 64-colour ambient lighting inside, as well as the option of real leather seats and upholstery.

The BMW X7 starts at £70,130, if you want to get the entry-level xDrive 30d version. The one being used for this test, however, is the sportier M50i, which has been fitted with way too many options to list here. All in all, this makes the car here worth £113,030.

With its huge stance and grille, the X7 looks imposing on the outside, while the inside is rather more understated. However, you still get loads of premium touches, including piano black, leather and metal surfaces. The infotainment is a 12-inch screen that’s controlled by a rotary dial, and has been fitted with voice controls and a personal assistant.

The Tesla Model X Long Range starts at £82,700. Some extra seats (bringing the total in the cabin up to seven) have been added, as has a full self-driving capability, making the total sum of what Mat reviews £92,990.

The Model X Long Range has a 100kW battery with two electric motors (one for each axle to give the car four-wheel drive). It has the equivalent of 469hp, as well as 750Nm of torque, and can go from 0-60mph in 4.6 seconds. Its driving range is 314 miles – one of the best figures of any electric car on sale.

Need we talk about the Model X’s snazzy gadgets? After all, its infotainment touchscreen is its party piece, controlling so many of the car’s functionalities while always feeling intuitive and easy to use. It has a whole host of easter eggs, such as ‘emissions testing mode’ (AKA a virtual whoopie cushion in each seat) and even some video games to kill some time!

If you want to know more about electric cars, and what happened when we drove them until they ran out of power, tap the link below.

See which electric car has the longest range