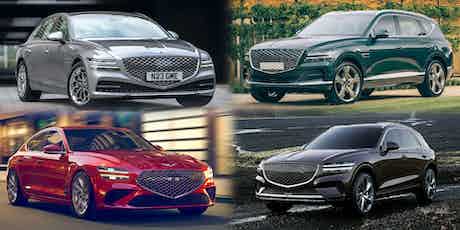 Genesis has revealed UK pricing for the G70 and GV70. Read on for the latest Genesis news.

Orders for the Genesis G70 and GV70 are set to start on September 1, with the saloon and SUV available from £33,850 and £39,450 respectively.
Three trims are available on both cars, each called Premium Line, Luxury Line and Sport Line.
For the G70 saloon, there’s a choice of a 2.0-litre petrol or 2.2-litre diesel. Both use an eight-speed automatic gearbox with all-wheel-drive. The highest-spec models start at £40,480.
The GV70 SUV can be had with a 2.5-litre petrol engine or 2.2-litre diesel, again both are linked up to an eight-speed automatic gearbox and an all-wheel-drive system. Range-topping versions come in at £44,370.

The Genesis GV60 electric SUV has just been revealed. It will be Genesis’s first ground-up EV design and will be an alternative to the Audi e-tron Sportback and BMW iX3. It uses the same platform as the Kia EV6 and Hyundai Ioniq 5.

Specification levels should be high considering the GV60’s luxury car positioning, and pricing is expected to be around the £60,000 mark. This would put it in a similar ballpark to the Audi e-tron Sportback and Jaguar I-Pace. It’s expected the GV60 will go on sale in 2022.

Prototypes of the first all-electric car from Genesis have been spotted testing, with this upcoming model likely to be related to the new Kia EV6 EV.

Heavy camouflage keeps the design of the car well disguised, but the tall bodystyle and dramatically sloped roofline give it a similar profile to the upcoming EV6.

It’ll likely use a 77.4kWh battery from the Kia as well, giving it more than 300 miles of range. You should be able to recharged the battery from empty to 80% full in around 20 minutes using a 270kW rapid charging feature.

No images of the interior have surfaced yet, but expect the Genesis EV to use similar infotainment tech to the Kia EV6 and Hyundai Ioniq 5. Although, this new Genesis will likely come with more leather and posh-feeling materials than those cars.

Read more on the Genesis EV

If you’re attending the Goodwood Festival of Speed, you’ll be able to catch the debut of the new Genesis G70 Shooting Brake. This new estate car will be making its first European appearance over the weekend event in Sussex, taking place from July 8 to 11.

The car will be unveiled at the South Korean brand’s own stand, with the Duke of Richmond and Dominique Boesch, Genesis’ European managing director, pulling back the covers.

One of the first new cars Genesis will sell in the UK is the Genesis G80 large executive saloon. This’ll be the Korean company’s alternative to the likes of the Audi A6, Mercedes E-Class and BMW 5 Series.

There will be two engines on offer, namely a 207hp 2.2-litre diesel and a 300hp 2.5-litre petrol, both will be equipped with eight-speed automatic transmissions and rear-wheel-drive, with all-wheel-drive optional on the petrol variants.

The new G80 saloon will also be joined by the large GV80 SUV. This model will be going up against the likes of the BMW X5 and Mercedes-Benz GLE and it will be offered in five and seven-seat configurations in either Premium Line or Luxury Line trim.

A 300hp 2.5-litre petrol four-cylinder engine (as used in the G80) will be joined by a 274hp 3.0-litre six-cylinder diesel. Both will come with AWD and an eight-speed automatic gearbox as standard.

Pricing will kick off at £56,715 for the Premium Line 2.5-litre petrol in five-seat configuration. Opting for the diesel powerplant will cost just £100 more while adding two more seats will be £500. The plusher Luxury Line trim adds £5,600 to these prices.

This undercuts the equivalent BMW X5 and Mercedes-Benz GLE by close on £3,000 and also includes Genesis’ Five-Year Care Plan. Genesis also offers home pick-up and delivery at every step of the process, so you needn’t step foot in a dealership if you prefer.

There’s no official release date for the G70 yet – though Genesis claims it will arrive ‘shortly after’ the larger G80 and GV80, so it’s possible order books will open before the end of 2021. Using alternatives such as the BMW 3 Series, Jaguar XE and Lexus ES as a reference, the Genesis G70 will likely have a base price around the low £30,000 mark.

With family-sized SUVs being incredibly popular, there’s a good chance the Genesis GV70 will be the Korean car maker’s strongest seller in the UK. With its imposing front grille and horizontal front and rear light motifs, there’s also no mistaking the GV70 for the likes of the Land Rover Discovery Sport, Volvo XC60 or BMW X3.

Like the G70, the GV70 doesn’t have a pencilled-in release date just yet, though it’s likely the first customer cars will start roaming UK roads before 2022.

Can’t wait for these new cars to go on sale? Compare the latest SUV offers or check out the best saloon cars on sale. If you’re after a new EV, check out carwow’s pick of the top 10 electric cars on sale now.