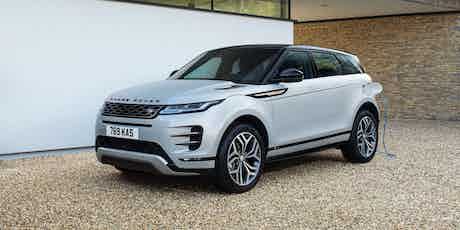 The new Range Rover Evoque PHEV has been revealed. This plug-in hybrid SUV can return more than 200mpg and costs from £43,850.

The new Range Rover Evoque PHEV can drive for 41 miles on a single battery charge. Charging it from empty takes just under 90 minutes using a 7kW home wall-mounted charger, but you can boost its charge by 80% in just 30 minutes using a 32kw public charging point.

Travel any further than this and the petrol engine chips in to lend a hand. With both the engine and the motor working together, Land Rover claims the Evoque PHEV will return more than 200mpg. Although, you’ll have to drive incredibly carefully to get anywhere close to that figure in normal day-to-day traffic.

The electric motor isn’t just there to boost efficiency, it also helps the Range Rover Evoque PHEV sprint from 0-60mph in less than 6.4 seconds. You can alter how the Evoque uses its motor by switching between its three driving modes. Hybrid mode uses both the engine and the motor, EV mode switches off the petrol engine and Save mode relies more heavily on the petrol engine, using it to drive the car and re-charge the batteries on the move.