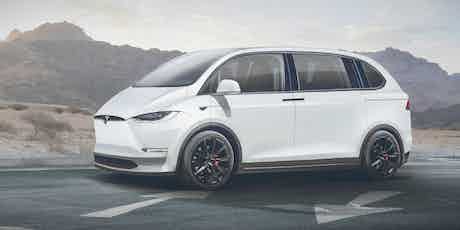 Tesla’s CEO Elon Musk has confirmed that a practical minivan is coming to the electric car manufacturer’s lineup in the near future. Our exclusive render shows what this useful family car could look like.

The minivan will see Tesla enter a new market as it looks to expand its vehicle range, including other new cars such as the Model Y compact SUV and a possible pickup truck. Here’s what we know about the Minivan so far…

The exterior design of the Tesla Minivan will take hints from the Model X SUV and feature the typically thin grille and pointy, narrow headlights seen on other Tesla models. The front of the car will be simplistic in its styling, with a few sharp lines diverting attention from its boxier MPV shape.

The minivan’s main focus will be on size and practicality, meaning it could come with electric sliding rear doors to boost access to the rearmost seats. It could feature a more rounded shape, similar tp the Model X, with plenty of glass giving the cabin an airy feel.

Tesla’s large, portrait touchscreen infotainment system is likely to be included and the manufacturer’s high quality materials, uncluttered interior and generous levels of standard equipment will also feature in the minibus.

Tesla wants to start building high passenger density urban transporters, outlined in its future plan. This suggests the minibus will squeeze as many seats as possible into its large dimensions, possibly seating between eight to 10 people. It’s likely be used as taxis or shuttle buses – users for whom running costs are of prime concern.

The minivan is thought to be based on the Model X SUV chassis, but could use longer overhangs and a taller roof to give more interior space. Performance won’t be particularly important but the Minibus will need a decent battery and electric motor combination to give it reasonable performance when carrying a full complement of passengers and luggage.

Two and four-wheel drive options could be possible and it could share the same electric drivetrains as other Tesla models, with 60, 75 or 90kWh lithium-ion battery options. If the minivan is to work as a taxi, range will be crucial. We expect the large MPV to manage around 250 miles on a single charge.

Tesla’s autopilot autonomous driving system will be featured on the minivan but Tesla wants practical cars such as this to eventually be semi or fully autonomous.

As the Model X chassis already exists and the drivetrain technology is there too, we could expect the Minivan to be revealed next year and potentially even go on sale by the end of 2017, although a 2018 reveal is more realistic.

The large MPV could be more expensive than other cars in its class due to its electric technology and high-quality interior, but should still undercut other Tesla models such as the Model S. The Minivan could cost from around £40,000, increasing to more than £55,000 with options.