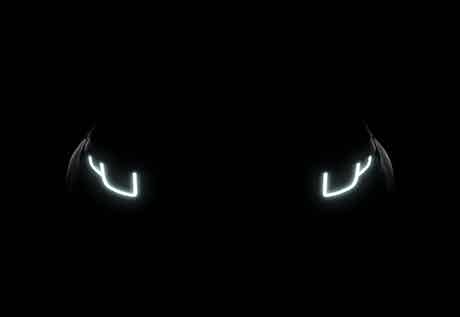 Land Rover has released the first image of the updated Range Rover Evoque – but in a bid to save on their electricity bills, they decided not to turn on the studio lights.

As a result, the teaser image gives very little away. It does, however, show off the stylish SUV’s updated headlights. The lights will be the first on any Land Rover to be fully adaptive LED units, which can follow turns in the road based on the angle of the steering wheel. Among the many other advantages of an LED setup, the bulbs can be arranged in a very intricate way, allowing designers to create distinctive headlamp signatures for each model. The latest changes appear to have given the Evoque a more aggressive look than before – at least at night.

Beyond that, we predict that the other design changes will be minimal. Land Rover is currently selling Evoques almost as quickly as it can build them, so the company will be reluctant to tamper with a winning formula too much. However, expect an updated range of efficient four-cylinder engines to feature – the same units due in the new Jaguar XE – and subtle improvements to safety equipment and interior accommodation.

The refreshed Evoque will publicly appear in a well-lit room for the first time when full details are released on 23 February.