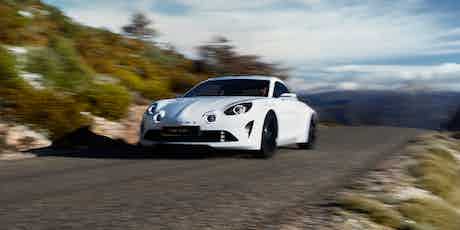 The Renault Alpine previews a return for one of the brand’s most iconic models, and marks a triumphant return to the sports car market

Renault has confirmed it will put the new Alpine sports car into production as a rival for the Alfa Romeo 4C and Porsche Cayman. The production model is believed to look almost exactly like the Alpine Vision and race car-inspired Alpine Celebration show cars and will hit European streets in early 2018.

Thought to be named the A120, the final model won’t be much bigger than an Audi TT but, unlike that car, the Alpine will be rear- or mid-engined. This will give it better weight distribution, helping make the car handle better with sharper turn-in and better traction.

The Renault will also probably be a lot lighter than rivals. Some sources are claiming it will weigh as little as 1,100kg, much less than the Porsche Cayman at 1,695kg and only a little more than the carbon fibre Alfa Romeo 4C’s 895kg.

The cabin will be performance focused with little to distract the driver from the task of having fun behind the wheel. A digital readout replaces the traditional dials but, elsewhere, simple knobs and switches control much of the car’s main functions allowing for an intuitive and ergonomically friendly environment.

There’s no confirmation on what will power the Alpine but likely candidates include the 1.6-litre turbocharged four-cylinder from the Clio Renaultsport or the larger 2.0-litre from the Megane Renaultsport. Power is expected to be roughly 300hp – about the same as an Audi TTS – but could end up as high as 400hp for more expensive models.

Sending the power to the rear wheels will either be a six- or seven-speed paddle-shift automatic gearbox from either the Clio Renaultsport or the Talisman saloon. Combined, this could mean acceleration from 0-62mph in less than five seconds and a top speed approaching 160mph.

The original Renault Alpine has lots of success in rallying competitions in the early 1970s and, with the sport gaining new interest, the brand could field the new Alpine in modern competition. Our render above shows what we think the new Renault Alpine could look like in the heat of competition.

Rule restrictions will probably limit power to around 300hp but technologies including anti-lag, advanced tyre compounds and traction control will make it a fearsome competitor off-road. The mid-engined layout means it’s easy for the car to change directions helping it be more agile around tricky mountain roads.

If you don’t want to wait for this exciting retro sports car, check out our list of the best sports cars on sale. Head over to our new car deals pages to see the discounts carwow could help you get.