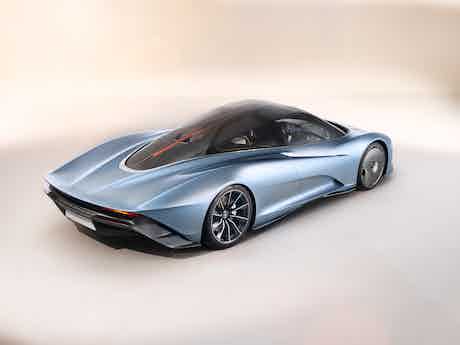 This is the McLaren Speedtail, the most powerful car Mclaren has ever produced. We have price, specs and release date of this ultimate road car

McLaren has taken the wraps off its ultimate road car, the McLaren Speedtail. With a petrol-electric drivetrain that delivers more than 1000hp, it’s the fastest and most powerful car the company has ever produced.

The McLaren Speedtail won’t come cheap. In fact, it’ll cost a cool £1.75 million plus local taxes – although that has done nothing to deter potential buyers. McLaren is going to produce just 106 Speedtails – the same as the number of F1s that were sold in the 1990s – but every single one is already reserved.

However, those lucky few are going to have to wait a little while to get their hands on their car. First deliveries won’t happen until early in 2020.

One of the first things you’ll notice about the McLaren Speedtail is that the driver’s seat is in the middle of the car. The two other seats are then set either side of it and slightly behind it. Not only does that ape the layout in the legendary McLaren F1, it means the car can be basically a teardrop shape – which is the fastest and most aerodynamic shape in nature.

In fact, the shape of the whole car has been designed to be as slippery through the air as possible – and very successfully, too. This is the most aerodynamic car the company has ever produced, with vents, ducts, diffusers and blades all over the body to guide the airflow in the most efficient way possible.

The attention to detail goes so far that the car has digital rear-view cameras instead of door mirrors. There are also covers over the front wheelarches to reduce turbulence, the number of shutlines (gaps between the panels) has been kept to a minimum, and the rear ailerons adjust to suit the car’s speed.

Even the sheer length of the car – it’s half a metre longer than McLaren’s other Ultimate Series hybrid, the P1 – is designed around aerodynamics. The long tail that gives the car its name is designed to smooth the airflow off the end of the car and reduce drag.

To complement that slippery shape, the Speedtail uses lightweight materials throughout. Like every McLaren since the F1 in 1993, the new car is built around a carbon fibre chassis. Every body panel is also made of carbon fibre, while the suspension is made of aluminium, resulting in a dry weight of just 1430kg.

To haul it around, the car has a petrol-electric hybrid powertrain with 1050hp. That makes this not only the most powerful car the company has ever produced, it’s also the fastest.

In fact, it’s so fast that the company doesn’t bother with something as humdrum as a 0-60mph time. Instead, it says that the Speedtail will accelerate from 0-186mph (300kph) in an incredible 12.8 seconds – almost four seconds faster than the P1 – and go on to a top speed of 250mph.

To achieve that top speed, the McLaren Speedtail uses a Velocity mode that was developed specifically for the car. This optimises the powertrain for high speeds, as well as tailoring the angle of the rear ailerons and retracting the rear-view cameras to reduce drag.

According to McLaren, the Speedtail interior is an ‘unprecedented blend’ of craftsmanship, materials and personalisation. Mind you, you’d probably expect as much of a car this expensive.

The central driving position gives a sense of space, while the amount of glass around the passengers makes for a light and airy cabin – unless those inside prefer otherwise. In that case, the glass on the roof and the upper sections of the doors can darken, while the top section of the windscreen can also be darkened independently at the touch of a button – which means the car doesn’t need conventional sun visors.

The thoroughly modern design continues across the dashboard, where the displays and touchscreen remove the need for any buttons. In fact, pretty much the only physical controls in the cabin – aluminium buttons to start the engine, turn on the Active Dynamics Panel and engage Velocity mode – are in panels above the driver’s head.

Such technology is blended with the highest levels of quality and the cabin is designed by McLaren Special Operations to the individual demands of each customer. Suffice to say, no two Speedtails will be identical.

Being a three-seater, the Speedtail is already more practical than most hypercars. But, those three won’t need to travel too light. Speedtail owners have a bespoke set of luggage that has been designed to make the most of the luggage space at the front and rear of the car.

As you would only expect on a money-no-object car like this, the carbon fibre, leather and metal on the cases matches the interior of the car.