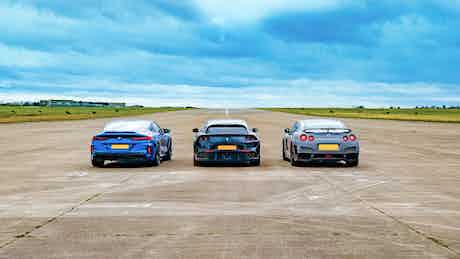 We’ve brought together a BMW M8 Competition, Ferrari GTC4 Lusso and a tuned Nissan GT-R to duke it out in our latest head-to-head drag race. Watch the video to find out which comes out on top…

Now, let’s get one thing straight – these cars aren’t even closely matched on price. But, that’s not the point of this race. Instead, we want to find out what’s the fastest way to carry you (and three fairly diminutive friends) from the start of a quarter-mile drag strip to the end.

In the blue corner, we have the BMW M8 Competition. Its 1,960kg waistline makes it the heaviest car here, but it packs 625hp and 750Nm of torque from its twin-turbo 4.4-litre V8. This engine’s oomph is directed to all four wheels through an eight-speed automatic gearbox with launch control. Well, it’s a similar launch control to the BMW M5 – a car that Mat’s had plenty of trouble getting off the line in the past. So, will it be the M8’s Achilles’ heel?

Next up is the Ferrari GTC4 Lusso. This is by far the most expensive car in our drag race (it’ll set you back a cool £240,000) but it’s a smidge lighter than the BMW and quite a bit more powerful. Its 6.3-litre V12 cranks out a whopping 690hp. This prancing horse loses a bit of ground to the BMW when it comes to torque, though – its naturally-aspirated 697Nm V12 is no match for the twin-turbo V8. Like the M8, it comes with four-wheel-drive, but the Ferrari’s system can’t deploy the engine’s full torque across the same speed range as the BMW.

Completing our lineup is a Nissan GT-R. And not a brand-new one, either. This is a second-hand 2009 example that was bought for less than the price of a well-specced Audi A3. So, it’ll have no chance against these might GT cars, right? Well, some turbo-based tinkering means than this ageing GT-R produces 630hp and a colossal 780Nm of torque. It’s also the lightest car in our lineup, by far.

So, which of these three sports cars-turned drag racers come out on top in our series of tests? Watch the video to find out…