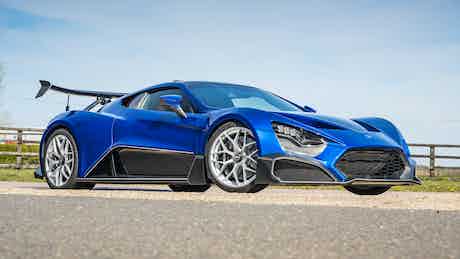 The Zenvo TSR-S is a limited-run models that ticks all the boxes for those wanting to stand-out. Mat gets behind the wheel of this track-focused supercar.

If you’re a multimillionaire and are after something pretty out there, then Danish brand Zenvo might have the car for you.

This TSR-S is a track-orientated supercar that has in-your-face features, like the massive air vents and inlets all around, big spindly wheels and – saving the best till last – the amazing hydraulic rear wing.

That wing is this car’s party piece. To supposedly create more downforce through the corners, the wing pitches and pivots in the opposite direction that you turn to put pressure down on that corner of the car. But even if that doesn’t quite work for you, it looks funky.

There’s also a shed load of carbon fibre, while the angles and lines of the bodywork to help with air movement over the car make it look super aggressive. There’s also a huge rear splitter to direct air, and the titanium exhausts have a lovely blue-ish sheen to them.

Although, if you find it a bit too in your face, Zenvo do produce a toned-down model called the TS1 GT.

As only five TSR-Ss will be built every year, the engineers have pulled out all the stops for the cabin. With completely bespoke switches and buttons, the feel and look of the TSR-S is excellent.

But as a limited-run, track-orientated supercar, the interior is a bit spartan compared to most other cars. You sit in superbly supportive carbon fibre bucket seats, and there’s some Alcantara to make it feel a bit more plush – while there’s still plenty of carbon fibre.

What you may be surprised to see is an Apple iPad Pro at the centre of the dash. Rather than develop its own system, Zenvo has added software to the large tablet instead – and we’re surprised other manufacturers don’t do that more often. The large driver information display is also excellent.

Zenvo has angled this to be a beast on track – but that doesn’t mean it isn’t liveable on road. Although the firm suspension means you feel pretty much all the road beneath you, it isn’t overly harsh. If you’re on your way to a track day in it, it won’t break your back.

Rather than most modern cars, Zenvo has gone with hydraulic steering. That means it’s super direct and you get plenty of feel. The engine also delivers its power very smoothly thanks to it being supercharged rather than turbocharged.

Speaking of the engine, it develops an impressive 1,177hp and 1,200Nm of torque, and it’s teamed with a seven-speed paddle-shift gearbox with racing ‘dog’ gears. That pushes the TSR-S to a top speed of 202mph. Zenvo claims a 2.9-second 0-60mph time, but when it’s fitted with semi-slick track tyres and all the power goes through the rear wheels, that can’t quite be done on a damp road.

That doesn’t mean it isn’t ballistic when you put your foot down, with the racing-style gearbox allowing for rapid changes to get you speeding along in no time. One issue with the transmission though is how it changes from the standard drive gears to reverse.

Much like a racing car, changing to reverse takes an absolute age, so if you’re trying to U-turn or manoeuvre out of a junction, make sure you’ve got lots of space and time.

When you get to a stretch of open road or are on a track, the TSR-S comes alive and you get the full sense of what it’s capable of.

If you’re in the market for a supercar that’s almost as exclusive as it gets, then the TSR-S should be a car that you can certainly consider.

It may not be a supercar that’s instantly recognisable or as desirable as others – but if it ticks your boxes, then it can be yours for just under £1.3 million. Oh, and more likely than not you’ll have to wait a while to get one.