BMW How to buy the new BMW M3 and M4: prices, specs, options and extras

How to buy the new BMW M3 and M4: prices, specs, options and extras 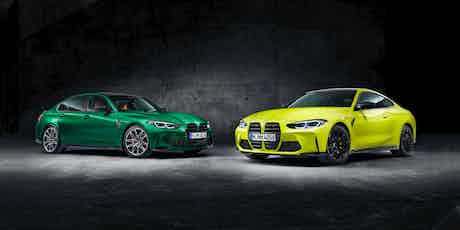 Read our guide to choosing a new 2021 BMW M3 or M4 to help you buy the perfect new car.

The new BMW M3 and M4 have been revealed, and are available to order now. They cost from £74,755 in the UK, but that’s just the beginning – there are plenty of options to choose. That’s why we’ve put together a handy guide to the BMW M3 and M4, and how to spec one to make it perfect for you.

Let’s get some of the basics out of the way first. The BMW M3 is a high-performance saloon car based on the 3 Series, while the M4 is the coupe version, with two doors and smaller rear seats. Both use a six-cylinder 3.0-litre petrol engine with up to 510hp for astonishing performance – 0-62mph takes just 3.9 seconds.

The latest M3 and M4 are the most striking yet, thanks to their huge snout-like grilles at the front, but they also get plenty of aggressive bodywork details all over the car. If you love the way it looks, read on to find out how to buy one.

In the UK all BMW M3 and M4 models come with the Competition pack as standard. That means they all come with a seven-speed dual-clutch automatic. Manual models are available elsewhere, but not here in Britain. Four-wheel drive is set to join the range later, but for now it’s rear-wheel drive only. That means there’s only one choice to make here: the £74,755 M3 saloon or the £77,155 M4 coupe.

Both cars have the same colour choices when it comes to paint. The BMW M3 and M4 are available in two non-metallic colours, white and Sao Paulo Yellow, a pale golden shade. Then there are eight metallic paint options covering black, grey, blue, red and green. All of these paints are included in the asking price, but you can splash out £2,985 for Frozen blue paint or £3,985 for a Frozen white finish.

Next up you’ll have to choose your alloys. There are five sets to pick from on both cars, all 19-inch at the front and 20-inch at the rear. Most sets cost £300 but there’s a pricier two-colour £850 set. All look quite similar, aside from the colouring.

Moving to the inside of the car, you can now pick your trim. The carbon fibre trim on the dash is standard but you can pick from four styles of upholstery. There’s a mad-looking blue and yellow set but if you’re feeling more reserved then there are traditional black, grey and brown combinations as well. Some of the options you see on the configurator are only available with additional stereo equipment, but all changes to the upholstery cost from £300.

Now let’s move on to the M3 and M4’s option packs. The first is the £990 Comfort Pack, which adds keyless entry, a heated steering wheel and an electric bootlid. Next is the £1,500 Visibility pack, adding laser headlights.

The £17,50 Technology pack adds a video recording function, which takes a video from the cameras outside the car – ideal for recording your track-day heroics. It also adds extra parking cameras with a 360-degree view of the car, and lots of safety kit including autonomous cruise control and various cross-traffic warnings to prevent low-speed bumps and scrapes.

If you want to raise the car’s top speed from 155mph to 180mph, you’ll need to spend £2,095 on the M Driver’s Package. It’s a contender for the worst-value option in all of motoring at the moment.

The Carbon package adds carbon seats and exterior trim for £6,750, another eye-popping price for such a small addition. Then there’s the £7,995 M Pro Pack, which adds carbon-ceramic brakes and increases the top speed. We’d recommend spending your eight grand on pretty much anything else.

If you really do want everything on your M3 or M4 you can add the Ultimate pack, which makes it easy – it adds all of the above for £11,250. There’s also a range of M Performance parts, including carbon-fibre bumper trims, a rear spoiler, larger 20- and 21-inch alloy wheels and a sports exhaust with a unique stacked-tip design. They won’t add any power, but they will give your M3 and M4 a racier appearance.

Some of the options included in the packs above can be added as optional extras on their own, in case you don’t want the whole package – for example, steering wheel heating on its own is £170. However, since the UK gets the highly-specced Competition model as standard, a great deal already comes as standard. There’s also pretty much no difference between the options available on the M3 and M4 – the only difference is the body shape.

A BMW M3 Touring is set to arrive after the normal saloon, possibly in 2022. Not only has it been spied during testing, it’s also been confirmed via an official teaser image from BMW, which shows the bigger, more practical rear end. It will use the same engine and gearbox as the M3 saloon, although it isn’t known whether it will be four-wheel drive, rear-wheel drive or have both options.

Read all about the BMW M3 Touring

Compare the latest BMW deals or check out the carwow offers available on the best four-seat sports cars.