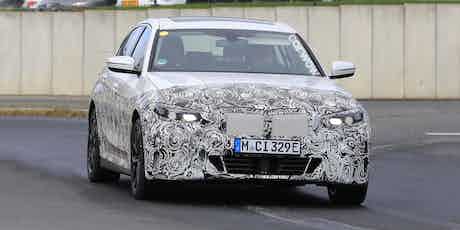 An all-electric version of the BMW 3 Series has been spotted testing. Here’s everything we know so far about BMW’s upcoming alternative to the Tesla Model 3 and Polestar 2.

Check out the latest BMW deals

BMW has been spotted testing a new electric version of its popular 3 Series saloon. This new car, which may be called the i3, is expected to go on sale in late 2021 or early 2022, after the upcoming BMW i4 electric car.

This prototype car isn’t wearing a great deal of camouflage, so you can get a pretty good idea of what the all-electric BMW 3 Series will look like. Chances are, there’ll be little to tell the battery-powered BMW apart from today’s petrol- and diesel-powered 3 Series, besides a lack of exhaust pipes, of course…

If the recently revealed BMW iX3 SUV is anything to go by, there will likely be other little details on the electric 3 Series. The disguise on the test car all-but-confirms the two kidney grilles on the front will be covered-up, and you can expect a sprinkling of blue trim pieces along the sides and on the rear bumper.

Since the electric BMW 3 Series’ exterior will almost certainly be very similar to the standard car’s, it’s safe to expect the interiors in both cars to be broadly the same as well. That means the new all-electric 3 Series should have a fairly simple and minimalist interior, with most of the controls being operated through buttons on the steering wheel or the big touchscreen display that’s angled towards the driver.

You can expect the new electric 3 Series to come with BMW’s latest iDrive Professional infotainment system, including the excellent ‘Hey BMW’ personal assistant. This voice-control feature understands commands spoken in plain English and is usually much more reliable than the similar systems you can get in Mercedes and VW cars.

The new electric BMW 3 Series (or i3 as it may be called) is expected to share plenty of its electrical underpinnings with the iX3 SUV. This should mean it’ll manage around 285 miles between charges and will be compatible with the 150kW public fast chargers. These will allow you to boost the car’s charge from empty to around 80% full in just over half an hour.

BMW hasn’t confirmed any details about the new electric 3 Series, but it may be offered with a range of battery capacities and power outputs. Don’t be surprised if there ends up being an entry-level car with the iX3’s 286hp motor, and a performance-oriented flagship version with the sort of power previewed by the 530hp i4 Concept.

There’s been no official word yet from BMW on when the electric 3 Series will go on sale. However, the upcoming BMW i4 four-seat coupe should arrive in showrooms before the end of 2021, so there’s a good chance the battery-powered 3 Series will be available to buy from 2022.

When it goes on sale, you can expect the electric BMW 3 Series will be quite a bit pricier than the regular car. Whereas an entry-level, petrol-powered 3 Series will set you back around £31,000, the all-electric version will likely start from at around £50,000. That’s around £10,000 less than the BMW iX3, on-par with the Polestar 2, and £7,000 more than a Tesla Model 3.