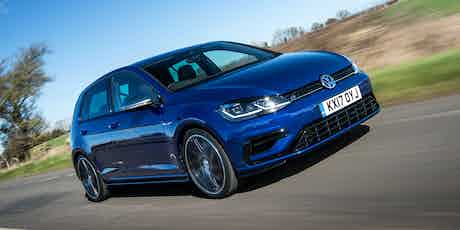 Can a slight increase in power and a new infotainment system keep the facelifted VW Golf R at the top of the pack?

This is the new VW Golf R, ‘new’ being a term we use lightly – it’s really just a facelift of the old car with revised front and rear lights, a better infotainment system and a slight increase in power.

That all-important added oomph comes about thanks to a software update that increases power from 300 to 310hp. In practice, it means the Golf R feels lightning quick but then, it always did. At far beyond legal speeds, there’s plenty of power in reserve and the 4Motion four-wheel-drive system means there’s an excess of grip, too. In the six-speed manual version we drove, the car will get from 0-62mph in 5.1 seconds and tops out at 155mph.

If you yearn for more power, there’s talk of a Golf R performance pack with bigger brakes, revised suspension and a top speed that’s raised to 166mph. It’s yet to be confirmed for the UK but we’re keeping our fingers crossed.

While it’s hard not to talk about performance when you mention the Golf R, we should probably also draw your attention to the new 9.2-inch Discovery Navigation Pro infotainment system. It has clearer graphics than the system it replaces, can learn your preferred routes and provides a wireless connection to the car for checking its fuel level and range.

The latter two functions require you to specify VW’s online services – called Carnet. It allows you to book your car in for a service from the comfort of the driver’s seat and can call the emergency services in the event of an accident.

Our only complaint is that VW has scrapped the volume knob in favour of fiddly touchscreen buttons. Mind you, the standard fitment of its Driver Info Display – VW-speak for Audi’s Virtual Cockpit – makes up for this.

It’s a more-important model for VW than you might imagine – the R currently outsells the GTI at a rate of nearly two-to-one and accounts for around 10 per cent of all UK Golf sales.

So it’s a case of new Golf R – same as the old Golf R, but what can’t be disputed is that this series of additions keep the Golf fresh until an all-new Golf arrives in the next couple of years.

Read our full VW Golf R review to get an accurate picture of what it’s like to own this car.