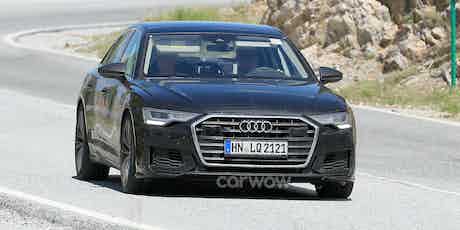 The 2018 Audi S6 has been spotted completely uncamouflaged. Keep reading for the price, specs and release date of Audi’s hot mid-sized saloon

The new Audi S6 – the hot version of the firm’s A6 family car – has been spotted testing ahead of its launch later this year (2018). It comes with impressive specs that include a 2.9-litre twin-turbocharged V6 engine and quattro four-wheel drive.

Can’t wait for the new Audi S6 to go on sale? Visit our S6 deals page for the current model or click on the button below to configure a new S6 and compare offers on a range of new, pre-registered and used in-stock cars.

The new Audi S6 saloon will bridge the gap between the regular A6 and the soon-to-be-revealed high-performance RS6. The S6 saloon will carry a £60,000 price tag but you can expect to pay a £2,000 premium for the more practical S6 Avant estate model.

The Audi S6 has followed the same tried and tested formula for years now – combine the practical shape of the standard A6 with an aggressive body kit and a powerful engine.

Added presence comes courtesy of a subtle-yet-effective body kit. Expect the S6 to have a revised ground-hugging front bumper with S6 badging and headlights that have been upgraded from the standard setup. You’ll also get chrome wing mirror housings. Lowered suspension and a wider track (the space between the left and right-hand wheels) gives the S6 a more aggressive stance than the regular car.

The S6’s side skirts flow into the rear bumper, but the biggest visual clue that S6 is not a humdrum A6 comes from its fat, quad exhaust pipes that sprout out from under the rear diffuser.

The Audi S6 has proven to be a popular model in the past because it combines break-neck performance with the things you love about a regular Audi – namely its rock-solid build quality and practical interior.

That said, there are enough changes made to the S6’s interior to make it instantly distinguishable from the standard model. The most obvious change will be the S6’s huge body-hugging sports seats that’ll hold you firmly in place during hard cornering.

Examine the interior further, though, and you’ll spot other changes such as the ‘Audi S6’ illuminated kick plates in the door openings and the dashboard’s mixture of sporty carbon fibre and aluminium trim pieces.

Even the A6’s fancy two-screen infotainment system will get an upgrade with S6 specific graphics to accompany the different driving modes available on the drive select screen.

If you have a family, though, you’ll be glad to hear the S6 keeps all the practicality you would expect of the standard A6, so it has plenty of space for four tall adults and a large boot that will swallow all their luggage for a couple of weeks away.

Even dog owners are catered for because Audi will build an S6 Avant estate, with an even bigger boot and a more practical load space with huge boot opening that makes it easy to load. It’ll come with an adjustable boot that’ll give the car a completely flat load bay when the rear seats are folded away – so you can, say, slide heavy flat-pack furniture into place without having to lift it. Expect the Audi S6 Avant’s boot to also feature handsfree opening and handy features such as a 12V power socket and various tie-down hooks.

The Audi S6 will come crammed full of the same clever technology you get in the A6 model that it is based upon. That means you’ll get no less than three infotainment screens – one in place of conventional dials behind the steering wheel and two more on the centre console.

Audi pioneered the idea of replacing conventional dials with a high-definition screen when it launched the current TT. Called Virtual Cockpit, the 12.3-inch digital display’s party trick is its ability to transform into a huge map screen that’s beautifully detailed and easy to follow because it sits in your eyeline behind the steering wheel.

However, with the new A6 comes even cleverer tech, which means the S6 will be available with two large central infotainment screens that look very high tech thanks to their high definition graphics. Haptic feedback tricks (well, almost tricks) your brain into thinking your fingers are pressing physical buttons and it can also display an augmented 360-degree view of the car making parking easy.

The only downside is that can be tricker to use when you’re driving than Audi’s traditional MMI fixed wheel control – although the new system understands voice commands better than most.

The other big revelation of this S6 model will be its optional self-drive technology. With it fitted, the S6 can drive itself on the motorway and in busy traffic. All you have to do is keep your hands on the steering wheel – the car will steer, accelerate and brake itself – making it an extremely relaxing way to cover huge mileages.

If you’re in the market for an S6 though, you’re likely to be more interested in what lurks under the bonnet. Thankfully, the 2.9-litre twin-turbocharged V6 – that’s widely tipped to power the new S6 – is unlikely to disappoint. Shared with the RS4, it produces 450hp, which should be enough to launch the S6 from 0-62mph in around 4.5 seconds.

The beauty of using a smaller engine -– the old S8 had a big 4.0-litre V8 – is that Audi can shove the engine further behind the front axle to give it better weight balance and make it feel more nimble in corners.

Standard four-wheel drive means the car will be predictable to control even in torrential rain, but the addition of Audi’s optional Sports Differential means it will still be possible to slide the car on a track. Four-wheel steering, meanwhile, is likely to be a standard feature that’ll make the S6 more manoeuvrable at slow speeds and more agile at high speeds.

If you’re considering an S6 then it’s fair to assume that low running costs probably aren’t going to be a priority, nevertheless the S6 should be able to return 30mpg – not too bad, all things considered.

If the 450hp S6 sounds a little too tame then you’ll want to wait for the full-fat RS6 model. It sits at the top of the A6 range and, as a halo model, is expected to be the only A6 to offer V8 power. It’s set to get the same 4.0-litre twin-turbocharged V8 as is fitted to the Porsche Panamera Turbo – in that car, it produces 550hp, enough to get it from 0-62mph in under four seconds.

You can expect the RS6 to have even more aggressive styling, the option to specify hugely powerful carbon-ceramic disc brakes and to be offered with the option to loosen the car’s speed limiter from 155 to 174mph – for ultimate pub bragging rights.

For more information on the S6 and RS6, bookmark this page – we’ll have full reviews and videos for both models in the coming months.