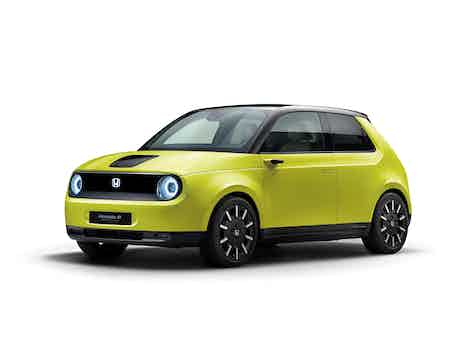 The Honda E is a funky, all-electric city car with a 125-mile range and a design that mixes high-tech and retro. Read on to find out more about price, specs and release date.

As a fully electric car aimed mainly at urban drivers, the Honda E will be on the same shortlist for buyers as a BMW i3 or Mini Electric. This means the new Honda will most likely come in at around £25,000-£30,000. A production version should hit showrooms in 2020.

Honda says its new electric city car will be able to manage around 125 miles on a single charge. That’s roughly 35 miles fewer than you’ll manage in a BMW i3, but the Honda E has been specifically built for the short hops of town and city driving, so that range should be enough for most daily situations.

And when you do need to charge it, there’s a simple socket in the centre of its grille that can receive an 80% charge with a fast charging station.

Town driving ought to be more a pleasure than a chore, too, as its been built specifically to be manoeuvrable in tight city streets thanks to rear-wheel drive – meaning a more direct, agile feel on the road. A 50:50 weight distribution will make it very predictable to drive, too. The lightweight aluminium suspension is also designed with the challenges of bumpy urban roads in mind: its independent setup is unusually sophisticated for a small city car.

The electric motor will provide plenty of instant get-up-and-go and there are no gears to worry about.

The retro design takes inspiration from Honda’s innovative small cars of the 70s without looking too twee, while the interior is dominated by a panorama of info screens. These include a large main touchscreen, plus a pair of smaller ones that receive images from a pair of rear-facing cameras, which replace traditional door mirrors.

The smart design and heavy infotainment focus of the Honda E is the first concrete sign that the company’s new small car will target premium EVs such as the BMW i3 and the Mini Electric.

Undoubtedly the most eye-catching feature is the car’s full-length infotainment screen. The right-hand side appears to be a touchscreen that’s organised into tiles much like you’ll find in the latest BMWs, allowing Honda to bank relevant information neatly together. It means Honda may, finally, have grasped the concept of an intuitive infotainment screen. You can but hope…

The system will provide information on navigation and the stereo, but also give detailed feedback on battery range and electrical recuperation. Meanwhile, the screen behind the steering wheel provides info on things like speed.

Smaller displays in both corners of the dashboard will be the monitors for the rear-facing cameras that replace normal door mirrors. That’s another Audi trick first seen on the e-tron – whether they offer any real advantages over the conventional mirrors is debatable. But, hey, they look cool.

The advantage of having a dashboard modelled on a Richer Sounds TV shop’s front window is that there’s space for that huge slab of wood than run across the top of the dashboard – making this one of the nicer interiors we’ve seen in a Honda recently. The look’s been borrowed from the Honda Civic of the 70s, fitting the retro brief that’s proved so popular for Mini.

The Honda E was first unveiled as the Urban EV at the 2017 Frankfurt Motor Show, and the transition into a production model has kept much of the bold, retro look intact. The cutesy face and bubble shape will be central to the little Honda’s appeal, as will its minimalist, unfussy approach. What our pics also show is that the car will get pretty bezzled LED headlights and taillights that resemble the symbols you’d see on the diagram for an electrical circuit board.

The Honda E won’t travel as far as expensive EVs like the Audi e-tron or Tesla Model S, but you can expect 125 miles from a single charge. A 0-62mph time of around 10 seconds is possible and would be quick enough to hit the Honda’s sporty-city-car brief. It would be nippy off the lights in town particularly because and, with no gears to worry about, accelerating will be simply a matter of pressing on the pedal. That, and the fact the Honda Urban EV will be exempt from London’s congestion charge, would make it a hard car to ignore if you’re looking for a stylish but frugal way of getting from A to B in town.

Bookmark this page to stay up to date on the Honda E.