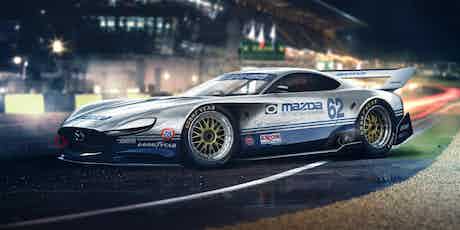 Mazda’s RX-8 successor could be called the RX-9 and looks set to be released in 2020. Read on for everything we know so far…

Mazda’s swoopy RX-Vision Concept could reach production before 2020 wearing an RX-9 badge. Reports suggest a roadgoing version of the radical concept from the 2015 Tokyo Motor Show could be Mazda’s first car with a rotary engine since RX-8 production ceased in 2011. Here’s everything we know so far…

If you can’t wait until 2020 to get behind the wheel of a new car, check out the latest new car deals available through carwow or check out our list of the 10 best sports cars currently on sale.

The RX-9 will be a two-door coupe with striking styling and seating for just two. It could potentially be based on an upgraded MX-5 chassis but it will be larger and more focused on outright performance than Mazda’s brilliant back-to-basics convertible.

It’ll draw inspiration from the RX-Vision – shown throughout – and possibly feature its thin headlights, dominant front grille and long bonnet. Mazda’s usual sharp lines may be ditched in favour of smoothly sculpted sides and an elegant flowing roofline. A rear spoiler and LED lights at both the front and rear may also feature on the production car.

The RX-9’s cabin will probably take design cues from the RX-Vision’s simple, clutter-free dashboard. Unlike the concept, the roadgoing model should be equipped with all the usual creature comforts including air conditioning and a centrally mounted infotainment screen. Material quality should be above and beyond that offered by Mazda’s current range of cars, however.

Mazda has reportedly been busy developing a new 1.6-litre petrol rotary engine for use in the RX-9. This high-revving unit could produce approximately 400hp thanks to a combination of turbocharging and advanced ignition systems inspired by modern high-performance diesel engines.

Mazda could reveal a prototype RX-9 at the 2017 Tokyo Motor Show but we’ll probably have to wait until 2019 before the finished car makes its public debut. When it does go on sale, prices will probably be comparable to the likes of the Porsche 718 Boxster. Entry-level cars could cost from £40,000, undercutting both the raucous Jaguar F-Type and the high-tech Nissan GT-R.

The Mazda RX-Vision concept has been revealed and, based on all the best guesses, this’ll form a replacement to the legendary RX-7. The car is built for high performance and Mazda will almost certainly take it racing eventually but we wondered – what would a racing version look like?

We tasked our tame photoshop expert to mock up a racing RX-Vision complete with racing livery, body kit, wheels and side-exit exhausts. We have no idea whether the final version will look like this but we’re keeping every single digit crossed that it does! Check out our render in glorious high resolution below…

The rumour mill has shifted into top gear as official images of what could be the replacement to the legendary Mazda RX-7 were released. Mazda has pulled the wraps off at the Tokyo Motor Show but no one is yet clear on what its intentions are with this new rotary sports car.

The original RX-7 gained cult status in the late ’80s and early ’90s thanks to its rev-happy rotary engine and superb handling. Its racing pedigree and stylish looks made the Mazda hard to resist if you could afford to foot the bill for costly regular maintenance.

News of an RX-8 replacement has been doing the rounds ever since the model’s demise in 2012 but these images are evidence that Mazda itself is taking the proposition seriously.

Mazda has finally released official images of its Mazda RX-Vision concept car which has been unveiled at the Tokyo motor-show this week. We can now see that the new car shares distinct styling cues from the famous final generation RX-7.

Very thin headlight pods which extend outwards from the large faceted Mazda grille are framed by a thin illuminated band (possibly of LEDs) which mimic the shape of the popup headlights on the third generation RX-7. A collection of strong horizontal features along with slim ground-hugging intakes gives the front of the car an aggressive and purposeful stance.

Mazda has chosen to sculpt the sides of the new car smoothly, without the strong, sharp creases of the current range of road cars. A thin vent mounted on the simple concave panel behind the front wheel is the only detail to speak of. Contrasting black sills hug the ground below the bodywork and kick upwards to meet the rear wheel just behind the door opening.

A flattened rear spoiler stretches across the rear of the car and sits on top of a contrasting black body panel into which the rear lights have been deeply recessed. Two large exhausts exit above a carbon fibre rear diffuser with one simple vertical vane protruding downwards in line with a red rear reflector.

The RX-Vision appears to feature rear-view cameras rather than mirrors, which, although common on concept cars, are unlikely to be fitted to a production vehicle.

The rotary engine which Mazda has already confirmed will power the new car has been given the official SKYACTIV-R designation. If Mazda has chosen to expend enough time and money to design and develop a brand-new rotary engine, it is possible that such a unit may feature in production models in the future.

Mazda’s revealed that the RX-7 concept it’s sent to the Tokyo Motor Show is powered by a rotary engine. Pundits were unsure whether the Japanese brand would commit to this design which has been plagued in the past by reliability concerns and high fuel consumption.

Kiyoshi Fujiwara, Mazda’s head of research and development, said that, despite the concerns about the reliability of rotary engines, Mazda’s engineers have used the latest cutting-edge tech to bring the engine up to modern standards.

If Mazda is able to exorcise the old reliability worries form the new engine, buyers will be able to take advantage of one of the most unique power units ever created. Rotary engines can produce gigantic levels of power from very small capacities so tend to be smaller and lighter than an equivalent piston engine.

Equally, thanks to having less rotating mass, they’re much smoother than piston engines and can rev much higher, lending them a race car-like feel. They also produce a unique wailing sound that would add some aural drama to the new RX-7.

While less of a surprise, Fujiwara also confirmed the new RX-7 would have a two-door, two-seater layout, much like the original RX-7. This, regrettably, means we’re unlikely to see a return to the RX-8’s clever four-seat, four-door layout.

Newly released images tell us the new car will be a coupe and most likely a two-seater, possibly based on the latest generation MX-5 with a slightly modified chassis.

The taillights certainly share features with the iconic third-generation RX-7 (above right) of the 1990’s and the large radius curves and svelte roofline would suggest the car was certainly an inspiration for Mazda’s designers.

Mazda said it aimed to condense its rich and innovative sporting history into the new concept car with hints of famous race and road-going Mazdas from the past such as the Cosmo Sport 110S (above left). Concept cars are traditionally where a company will preview new ‘design languages’ so the new car could reveal key styling features for future Mazdas.

Mazda itself has made references in press releases to rotary-powered cars from its past, most frequently the Cosmo Sport 110S. This was the first car produced by the company to include the revolutionary, pistonless engine and led the way for decades of unique sports cars including the iconic RX-7 and RX-8.

Although a characterful left-field choice, Mazda has said it will only incorporate a rotary engine into future vehicles if such a unit can be made as reliable and efficient as contemporary piston engines. Historically, the fine tolerances of rotary engines meant they were much trickier to use and maintain.

Emissions regulations and concerns over fuel economy are stronger than ever and Mazda will have a difficult task in bringing this notoriously thirsty engine up to scratch. If this concept teaser is anything to go by, it looks like it’s up to the challenge.

Following its debut, images of the RX-VISION concept’s interior have been shown. What’s immediately obvious is how stripped back the design is – a simple swathe of black leather stretches the length of the dashboard with a simple instrument binnacle in front of the driver. Simple dials sit within metal surrounds behind a button-free steering wheel.

Equally, the simple centre console houses a simple handbrake, starter button and control knob. Crucially, the car has a stubby metal gearstick that clearly leads to a manual gearbox – excellent news for driving enthusiasts. Even compared to the basic MX-5, the new RX-VISION looks more focused and sportier in the cabin.

As with all teasers it’s hard to predict any specifics but, if Mazda is serious about producing a successor to the RX-7, we expect to see it on the roads in 2017.

Top-spec versions of the new RX-7 could offer an alternative to an entry-level Porsche Boxster so could carry a possible price tag of between £40,000 and £50,000. In the hotly contested sports car market, Mazda will have to pick its fights carefully and price the new car accordingly.