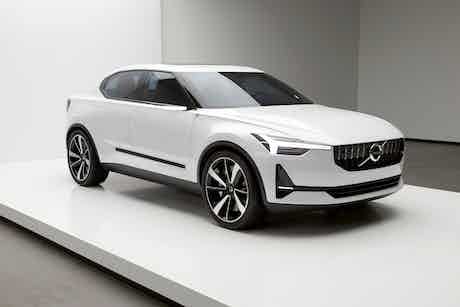 Volvo has revealed that the next version of the V40 will be available as an electric car, with two battery sizes to choose from. You’ll also be able to pick from a range of petrol and diesel engines, but the new V40 has been designed from the ground up to use electric power – and Volvo says all of its models will be available with hybrid or electric power by 2019.

The 2019 V40 will share styling bits with the XC40 SUV, including the bluff grille and angular LED headlights. The square rear lights and contrasting roof will also make it to the production V40, which as a whole will sit lower to the ground than the chunky XC40. Volvo’s aggressive new styling means it’ll look far sportier than the current V40.

It’ll also resemble the Volvo 40.2 concept shown on this page – after all, the 40.1 concept shown alongside it proved almost identical to the finished XC40 – although some of the details including the super-slim door mirrors will be changed on the production model. The 40.2 concept is a saloon, suggesting the V40 hatchback may be joined by a practical saloon model at some point.

Inside, the V40 will use most of the same materials and technology as the XC40 to create a premium-feeling cabin. Volvo’s intuitive nine-inch portrait touchscreen takes centre stage, and the V40 will have speakers in the dashboard instead of in the doors to give you more storage space for water bottles and the like. It’ll be trimmed in leather and you’ll be able to specify a range of materials for the dashboard and trim pieces.

Volvo’s four-cylinder petrol and diesel engines will be offered in the V40, but it’s expected that most cars will be either hybrid or fully electric. At least two batteries will be available – one with a smaller capacity and price tag, and a larger one that’ll cost a bit more. The fully electric models will be almost silent and will provide quick acceleration.

It’s currently a bit early to put a definite date on the Volvo’s launch, but expect it to be in late 2019 or early 2020. Prices will rise slightly over the current model, so expect it to cost around £22,000 for the entry-level model.