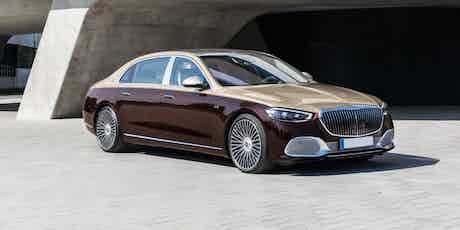 Mat’s been behind the wheel — and in the back row — of the ultra-luxurious Mercedes-Maybach S680. What does he make of this plush cruiser?

Despite being a step over the standard Mercedes S-Class for luxury, the Maybach S680 isn’t a huge visual departure.

The biggest changes come up front, with the headline act a posh new grille that features vertical slats. There’s a new chrome mesh section below that too, while a strip of the shiny stuff runs along the bonnet and swoops into the three-pointed star badge.

It’s longer down the sides too, with the Maybach seeing its wheelbase extended from 5.2m to 5.5m. It has a raised C pillar as well for the sake of more rear passenger headroom.

The S680 comes with 19-inch alloy wheels as standard too, though you can upgrade these to 21-inches if you wish.

There’s little difference of note at the back, except for the Maybach badging and another new chrome strip.

If the Mercedes S-Class is like stepping into a business class flight, the Maybach S680 is your very own private jet. It oozes luxury throughout, with pretty much every surface plastered with nappa leather.

Upfront, you (or more likely your chauffeur) will get super comfy seats with additional cushioning, plus a new Maybach-specific steering wheel. The infotainment system is lifted straight from the standard S-Class, though it can be used to open your Maybach S680’s rear doors.

Ideal for the VIPs among you, really — no need to have your chauffeur on show or such peasantry behaviour as opening your own door.

Once in, you can hop into first-class reclining seats supported with even more cushions. There’s plenty of head- and legroom normally but you can have the front seat electronically tucked away for even more space to stretch out.

The luxuries don’t stop there either. You can opt for a fridge between the rear seats to store champagne, and even have a set of flutes with holders specially designed for them. You can take control of the infotainment as well, be that from screens on the back of the passenger seats or a separate tablet.

You’re likely buying a Mercedes-Maybach S680 to be driven in rather than do the driving yourself. Beyond the ultra-luxurious interior we’ve already talked about, you’ll be happy to know it’s just as wonderful on the move.

Super supple suspension, partly down to a new ‘Maybach’ mode which slackens everything off, gives the S680 a feel akin to gliding along in a big fluffy cloud. There’s next-to-no noise coming into the cabin too — you’d probably get one of the best nights of sleep you’ve ever had in the back.

If you fancy getting behind the wheel (or you are indeed a chauffeur tasked with finding a car for a client), you’ll be happy to know the Maybach S680 is equally as impressive.

Adaptive suspension keeps the body in check, so no wobbling like a barge through corners, and the delivery of power from the V12 is ultra-smooth too. It doesn’t feel lightning quick from behind the wheel, but you’ll be at Autobahn cruising speeds before you even know it.

The Mercedes-Maybach S680 is ultra-comfortable and super luxurious, but then the standard S-Class isn’t too far behind it — and for quite a lot less. If you really want the ultimate luxury, a Rolls Royce Ghost stands out a little more.

New Mercedes-AMG S63e and S73e hybrids: price, specs and release date
Drag race: Nissan Skyline GT-R R32 vs R33 vs R34 vs Nismo GT-R R35
The best alternatives to the Mercedes A-Class
What is Alcantara suede? Is it worth it?
10 best cars with a high driving position
Drag race: Mitsubishi Evo VI Vs Subaru Impreza P1
New BMW 3 Series revealed: prices and specs confirmed
How is the Russian invasion of Ukraine affecting the global car industry?
Peugeot Allure trim: What is it and is it worth it?
Drag race: Audi RS5 vs BMW i4 M50
Understeer vs oversteer: What’s the difference?
Lamborghini Aventador generations drag race
Pedestrian crossings in the UK explained
10 of the best drift cars
Volkswagen Passat vs Audi A4