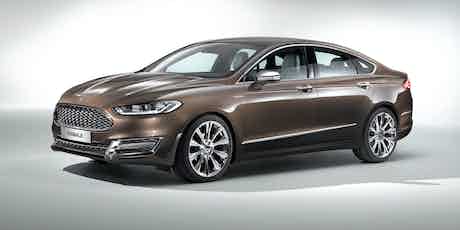 Ford reveals new noise cancelling tech for the Mondeo Vignale. Read on to discover if this new feature is worth it…

Noise cancelling technology, as used in many modern headphones, has been around for years. A new system developed by Ford hopes to offer Mondeo Vignale drivers a similarly refined experience.

The system works by detecting background noise using microphones then playing the opposite noise to cancel it out. This technology will help the upmarket saloon it compete with premium rivals such as the Jaguar XE, before being extended to other models in Ford’s range.

If you’re looking for a luxurious saloon car, put the Ford Mondeo Vignale into our car configurator to let carwow find you a great deal.

Noise cancelling technology uses a microphone to monitor ambient noises and a speaker to output the exact same sounds in an opposing pattern. When these ‘out of phase’ sound waves meet, they effectively cancel each other out and the volume of background noises is reduced dramatically.

The system developed by Ford uses three microphones installed in the Mondeo cabin, specifically tuned to pick up wind, tyre, drivetrain and traffic noise. The 12 speaker Sony infotainment system is then used to output the required opposing sounds to counteract any background noises. You can still listen to music or the radio while the system is functioning.

The Mondeo Vignale will also be equipped with new acoustic glass to further reduce noise intrusion. Using an exceptionally thin layer of clear acoustic insulation, unpleasant sounds from the wind, especially around the windscreen, can be significantly reduced.

The Mondeo Vignale also receives altered engine bay insulation made from foam instead of the usual fibreglass – that cuts noise intrusion into the cabin by 2 decibels. Further sound proofing in the wheel arches, underbody and doors alongside revised rear suspension turns down the volume by an additional 3 decibels.

Save money on your new Ford Mondeo Vignale

If you’re sold on this luxury saloon, our Ford Mondeo Vignale car configurator can help you get a great deal. If you’re not sure which is the car for you, our car chooser tool and deals page are here to help.