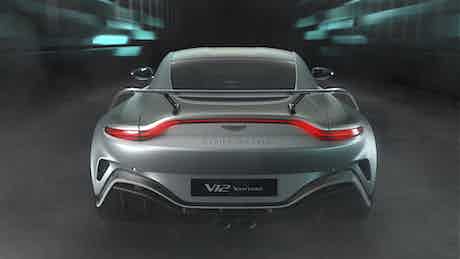 Aston Martin has revealed the new V12 Vantage, and it’ll be the last Vantage to be fitted with a 12-cylinder engine.

The new, and last ever, Aston Martin V12 Vantage has been revealed, and it’s the most powerful Vantage ever made.

This alternative to the Ferrari Roma and Porsche 911 Turbo S will go into production in the Spring, and it’s already sold out.

Fitting huge engines in their smallest sports car has been an Aston Martin signature since the first V12 Vantage in 2009. This is going to be the last V12 Vantage, so it needs to be pretty special.

The headline figures are promising, thanks to the 5.2-litre twin-turbocharged V12 engine. This puts out a whopping 700hp and 753Nm of torque.

This will push the Vantage from 0-60mph in 3.4 seconds, and it’ll go on to a top speed of 200mph. To keep it stable, there’s an aerodynamic package that includes a rear wing that makes 204kg of downforce at the car’s top speed.

Amazingly all this power is put to the road by the rear wheels only, which should make for a pretty exciting driving experience. The V12 Vantage does get a limited-slip differential to help tame the rear end, and it has an eight-speed automatic gearbox.

The Aston Martin V12 Vantage gets some pretty aggressive styling upgrades over the standard car, however a lot of these are functional to produce more downforce and improve aerodynamics.

Up front, you can see a deep front splitter and a heavily scooped bonnet. This, like a lot of the car, is made of carbon fibre to save weight.

The V12 Vantage is also wider than the standard car to accommodate a 40mm wider track (the distance between the wheels on the left- and right-hand sides) giving it even more road presence.

Down the side, you get some unique 21-inch alloy wheels wrapped in high-performance sticky tyres. There are also some carbon fibre skirts and vents to allow better airflow around the car.

You’ll notice the huge rear wing around the back which provides downforce at speed. There’s also a large diffuser and a centre twin-exit exhaust system.

The overall interior design of the new Aston Martin V12 Vantage remains pretty similar to the standard car, albeit with a few performance upgrades.

The most notable of these changes are the carbon fibre bucket seats. They look great with the exposed carbon and Aston Martin logo in the headrest, and they’re 7.3kg lighter than the standard Vantage seats.

Elsewhere, you get some more carbon fibre trim and V12 badges around the place. Other than that, it’s Vantage business as usual.

Only 333 Aston Martin V12 Vantage models will be built, and these are all sold out already. Customers can expect to start receiving their cars in the Spring of 2022.

Aston Martin hasn’t said how much this car will cost, however you can expect it to be a lot more than the standard Vantage. Somewhere close to £200,000 is likely.

Looking for a hassle free way to change you car? Head to carwow where you can sell your old car for a great price, and get amazing discounts on your new one all in one place. Check out the configurator to build your ideal model, or tap the button below to get help buying your next car.

Get help changing your car