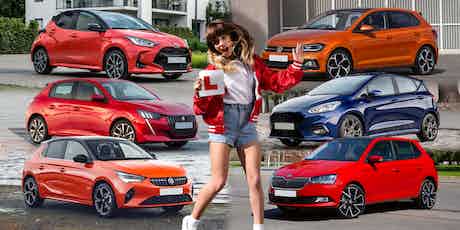 Everyone remembers their first car. It’s not just a way of getting to school or work – getting your own car is part of growing up, a taste of freedom and independence for the first time. Yet with so many different cars to choose from, finding the best car for a teenager might seem confusing.

The biggest hurdle is almost always car insurance, so in the list below there are only cars with small engines that should keep insurance costs down.

Yet there are plenty of other considerations with a teenager’s car: they’ve got to come with good safety features, and plenty of tech as well. Every teenager is glued to their phone these days, so Apple CarPlay or Android Auto should be high on the list of desirable features too. This means your teenager can use their phone’s apps (safely) without having to learn the car’s infotainment system.

As they build up their experience, teenagers will need a car that’s simple to drive and easy to park, too. Nobody wants a rubbish car, least of all teenagers – so if you’re buying a new car for a young driver, read on for our top picks. Each one has its benefits and drawbacks – but once you’ve picked out a shortlist, head to each car’s full review to get all the information you need and great offers from our trusted dealers.

The Hyundai i10 is a great choice for those who don’t need the space provided by a small cars elsewhere in this list. It’s a city car, which means it’s a bit smaller, but it’s also cheaper to buy and insure for teenagers.

The 1.0-litre engine might not be very fast or exciting, but that’s probably music to a parent’s ears. It is quite fun to use despite this, though, and it keeps costs low. Entry-level models are quite sparse, but the i10 is a cheap car so you should be able to move up to a better-equipped model for just a bit more money. SE Connect and Premium cars are the ones with the all-important Apple CarPlay and Android Auto.

The i10 has a good boot for such a small car, and because of its tiny size it’s easy to park and fits through tight city streets easily. It’s great for a more nervous teenager to gain confidence in, and despite its size it’s not unpleasant to drive on the motorway either.

If you ask your teenager ‘what do you want from a car’ and they shrug and mumble ‘dunno’ then the Volkswagen Polo could be the ideal car. It’s a fantastic all-rounder and covers off so many bases that it’s unlikely to disappoint as a first car.

Go for a 1.0-litre petrol model to keep insurance costs low – but this engine is great for anyone, not just teenagers. It’s peppy and fun to use, especially as a manual, and pretty economical as well, which should keep the other costs low. It’s a shame it’s not as fun to drive as a Ford Fiesta.

The Polo’s interior is great for a small car, although newer alternatives have overtaken it recently in terms of quality. It’s also more practical than you might expect, with lots of room in the back for mates and a big boot for bikes or boards. Smartphone connectivity is great too.

The Peugeot 208 is a funky-looking small car with a fantastic interior that’s bound to win over style-conscious teenagers. The on-board technology should win round any skeptics, too, as there’s smartphone connectivity and a 7-inch touchscreen infotainment system as standard.

The 1.2-litre petrol engine is a three-cylinder so it’s relatively affordable to insure and economical enough. It’s a fun engine to use too, and while the 208 isn’t among the best small cars to drive, it’s entertaining enough for teenagers to enjoy their early years of driving.

It’s a bit tight in the rear seats but the 208 has a decent boot, and there’s plenty of space in the front. There’s a fantastic electric version that would make a great first car for eco-conscious teenagers, but it won’t be cheap to insure because it’s quite powerful and significantly more expensive to buy.

The Ford Fiesta has been one of Britain’s best-selling cars for more than a decade, and with good reason. It’s a superb small car that has bags of appeal across all sorts of car buyers. It’s certainly the most appealing model for teenagers who love cars, because it’s a hoot to drive.

The 1.0-litre EcoBoost engine is affordable in terms of insurance and fuel costs. Combine that with one of the most fun-to-drive cars around and teenagers are bound to love it.

It’s not the most spacious supermini, nor is its interior as plush as some alternatives such as the Peugeot 208, but the Fiesta is comfortable enough. It’s kitted out with a great infotainment system called SYNC3 with smartphone connectivity, too.

Get offers on Ford Fiesta cars

The Vauxhall Corsa dukes it out with the Ford Fiesta at the top of the British sales charts, and the latest version is the best yet. It’s based on similar tech to the Peugeot 208 and comes with the same 7-inch touchscreen as standard, which is perfect for tech-obsessed teenagers.

The 1.2-litre engine is the best choice for cheaper insurance, but it’s probably the best engine choice in the Corsa range regardless. It’s fun to use and isn’t too loud inside the cabin on motorway trips.

Inside, the Corsa is better quality than ever and has a more traditional driving position than the 208 (Vauxhall and Peugeot are owned by the same firm, so these cars are mechanically very similar). This means it’ll be more comfortable for more drivers. It’s well worth a look if you like the 208 but don’t fit behind the wheel, or if you simply prefer the exterior looks of the Corsa to the French car.

If practicality is your number one concern, the Skoda Fabia is a great choice for teenagers. It’s one of the most spacious small cars around, so if you want to carry bikes, passengers, tents or anything else around the country in comfort, the Fabia is great.

It’s available with an economical and cheap-to-insure 1.0-litre petrol engine, which is great for young drivers. It’s not the most fun to drive, but with a manual gearbox it’s not bad, and the Fabia is pretty comfortable even over potholes and big bumps.

Even the entry-level Fabia comes with a 6.5-inch touchscreen infotainment display and Bluetooth connectivity, so teenagers won’t have any issue connecting up their phone and blasting their music on long trips. More expensive models have sat-nav but Android Auto and Apple CarPlay is possibly an even bigger draw for youngsters.

The Toyota Yaris could be the car for your environmental teenager, because it’s one of very few small cars that use electric power. It’s a hybrid, so there’s still a petrol engine, but it’s cleaner than an equivalent alternative because of the electric motor on-board.

The engine is a 1.5-litre petrol so it might be more to insure than others on this list, but that could be worth it for certain buyers. It’s automatic-only, so is also great for teenagers who have learned to drive on an auto-only licence.

The latest Yaris is the best yet, as it’s more comfortable than ever and has a good amount of kit as standard. It’s fun to drive even with the auto gearbox, and while it’s not the most practical car of its type, it’s got enough room for passengers in the back to get comfortable.

With loads of customisation options and a funky exterior look, the latest Nissan Micra should appeal to teenagers, unlike some previous versions of the car, which may have appealed more to older buyers. This latest version backs up its cool looks with a good driving experience too, although it’s not as practical as some alternatives.

The engines available in the Micra aren’t great on the whole, but the best pick for teenagers is the 1.0-litre petrol. It’s economical and should be reasonable to insure, like most other 1.0-litre engines.

The Micra’s best aspects are its handling – it’s really fun on twisty roads – and its comfort. It’s smooth over bumps around town and on country roads, and the seats are pretty comfy as well. The Micra is often overlooked but is well worth considering for young drivers especially as it’s packed with safety kit even on the most basic models.

The Fiat 500 is likely to be on your radar already, because it’s been a hit with teenage drivers for over a decade now. The 500 isn’t great value, but few youngsters can resist its charming looks and funky interior design.

The 1.0-litre engine is nice and cheap to insure and should deliver good fuel economy, so it’s the best pick for young drivers. The 500 is quite fun to drive, although it’s not that comfortable over bumps.

Part of the 500’s appeal as a new car rather than used is that there are loads of personalisation options – you can pick all sorts of colours, decals and wheel styles to make your perfect first car. It can even come as a cool-looking, soft-top convertible. Be careful about exceeding your budget, as it’s easy to get carried away on the long list of options. The 500 isn’t a good choice for those who regularly carry passengers or need a big boot.

A new Fiat 500 is on the way – and it will be an electric car only. So if your teenager wants to personalise a new one, you’d better get your order in quick.

The Citroen C3 is a great choice for those who simply want a comfortable small car to get to and from work or college. It helps that the C3’s design stands out among many similar-looking hatchbacks that young drivers tend to drive.

The 1.2-litre petrol engine is economical and reasonable to insure, as with all the cars on this list. The Citroen steps away from some alternatives that are good to drive – you’d be hard-pressed to call it fun, but instead it’s really comfortable.

It drives smoothly over lumps and bumps in the road and the cloth-covered seats are great to sit in. It’s quiet inside too, so long trips are no problem. The manual gearbox is a bit tough to use smoothly – you could see that as diving in at the deep end of gearbox control, or simply unnecessary hassle for someone who’s only just started driving.