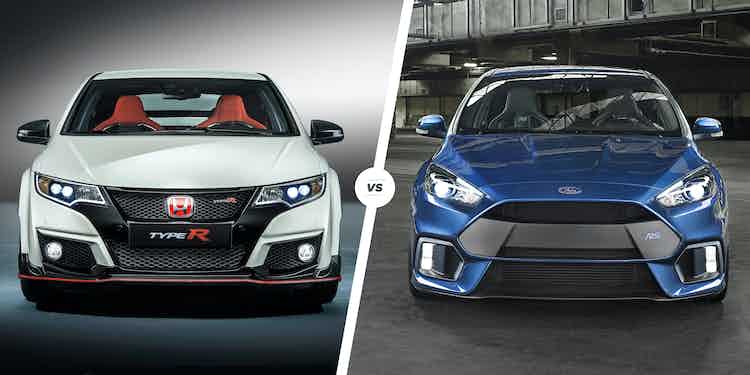 The hype surrounding the new Ford Focus RS has been almost deafening, so it’s fortunate for Ford that the new car is something truly special. Costing from just £29,995, it’s a fantastic all-round performance package that offers stonking performance and sensational value for money.

There are plenty of other, talented hot hatches on sale, however – one of the most impressive is the Honda Civic Type R. The Honda lacks the Ford’s four-wheel drive and doesn’t have as much power, but it’s still a thoroughly entertaining car to drive and own. It holds its own on the track – at the time of writing, it holds the front-wheel drive production car lap record around the fearsome Nürburgring test track.

Read on to discover which car is the right one for you, and don’t forget to use our Ford Focus RS deals page and Honda Civic Type R deals page to see how much money carwow could help you save.

Neither the Focus RS nor Civic Type R will suit the shy and retiring driver – hot hatches aren’t known for being the most discreet of cars, and these two in particular are some of the most attention-seeking motors on sale.

The Ford is based on the standard Focus model, but adds lots of sporting details to the mix. Larger alloy wheels, a huge front air intake, dual exhausts a rear diffuser and gigantic spoiler all add an aggressive look. Choosing one of the RS’ more vibrant colour schemes will make it stand out even more.

Honda has given the Type R an even sharper edged design than the shouty Focus, with plenty of black mesh, extra air vents and side skirts – this looks like a true racing car. The Type R has an even bigger spoiler at the rear but possibly lacks the most exciting colours offered on the Ford.

Buyers of both cars might be a little disappointed to find that neither car’s interior has been significantly upgraded over the standard versions – clearly most money was spent on mechanical upgrades.

The Focus RS gets a reasonably sombre cabin, with plenty of decent quality plastics but few unique touches. The infotainment system is a little outdated, and controls a little fiddly, but equipment levels are quite good and it arguably looks a little more modern than the Honda.

Honda has made the Civic Type R a little more outlandish. It gets plenty of red stitching and aluminium to brighten up the place. Unfortunately, the plastics are a little hard and, on the whole, it seems like the Honda has aged quite poorly compared to the Ford.

The Honda fights back with much better practicality – it has ‘magic’ rear seats which can flip-up or lay flat, and there’s a 477-litre boot for all your belongings. The Ford’s four-wheel-drive system means its boot space is a mere 216-litres – less than half that of the Honda, and noticeably less than many smaller rivals.

Just a few years ago, a hot hatch would have impressed with just 200hp. The hot hatchback market has now accelerated (literally) to the stage where 300hp is the minimum required to get any attention. This much power would’ve been thought of as sheer lunacy a mere decade ago.

Neither of our choices disappoint in the power stakes – especially the RS, with an Ecoboost 2.3-litre petrol engine that produces an amazing 345hp. Coupled with a four-wheel-drive system and a slick-shifting six-speed manual gearbox, the Focus can sprint from 0-62mph in a supercar-baiting 4.7 seconds.

Previous Civic Type Rs have used Honda’s VTEC technology to allow higher revs and more power, but the current car has moved towards a more conventional 2.0-litre turbocharged petrol arrangement. The Type R produces 310hp, but the front-wheel-drive layout means that it takes 5.7 seconds to get from 0-62mph.

Considering hot hatchbacks are most at home on windy B-roads, it’s safe to say that engineers on both cars have put a lot of effort into ensuring their respective models are a hoot to drive.

We were already firm fans of the existing Ford Focus ST, and the RS adds a whole host of features to make it even more entertaining. The four-wheel-drive system gives loads of grip, and has four modes for drivers to choose from. Normal and Sport are great for everyday use, but Track really allows the Ford to show off its abilities. Drift mode gives you the chance to perform controlled powerslides if you’re feeling brave.

The Civic Type R doesn’t offer anything quite so sophisticated as that, but it still has tonnes of grip thanks to wide tyres and a limited-slip differential. Steering is tight and communicative, and the manual gearbox has an excellent action. The Honda may be a little more old-school in its approach, but it’s a truly thrilling machine.

You might expect either of these machines to have price tags as extreme as their performance but, thankfully, both Ford and Honda have decided to price their ultimate hot hatchbacks at a reasonably sensible level. Both are noticeably cheaper than both the Audi RS3 and Mercedes-AMG A45.

The Ford is astonishingly cheap, costing from just £29,995 – only £3,000 or so over top-spec versions of its ST sibling, and that’s a fair amount down on power. Add in relatively respectable fuel economy of 36mpg, plus the fact that residual values are extremely strong for the RS, and you have a car that’s surprisingly cheap to run.

The Civic Type R is also priced from £29,995, but most buyers opt for the GT package, that costs an additional £2,300. The package brings goodies such as blind spot indication, lane departure warning and traffic sign recognition – all very handy and worthwhile, and not offered on the Ford. Residuals are likely to be a little lower, but fuel economy of 38.7mpg is perfectly acceptable.

Regardless of which you choose, you’re sure to be very satisfied with your new hot hatchback. Realistic running costs and near-supercar thrills on an everyday basis mean they’re both easy to recommend.

The Honda is arguably the more hardcore machine, with a back-to-basics approach that offers maximum thrills and an outlandish driving experience, with the added benefit of masses of practicality for when you need it.

But it’s the Ford that comes across the most well-balanced extreme hot hatchback. The four-wheel-drive system might rob it of some boot space, but it gives the RS abilities far beyond its price-tag. When you factor in the slightly tamer handling and unique drift mode, you have a machine that’s as adaptable as it is fun.

Save money on your new hot hatchback

If you’re sold on either of these cars, check out our Ford Focus RS deals page and Honda Civic Type R deals page to see how much carwow could help you save. For more options, head over to our car chooser to narrow down your search.