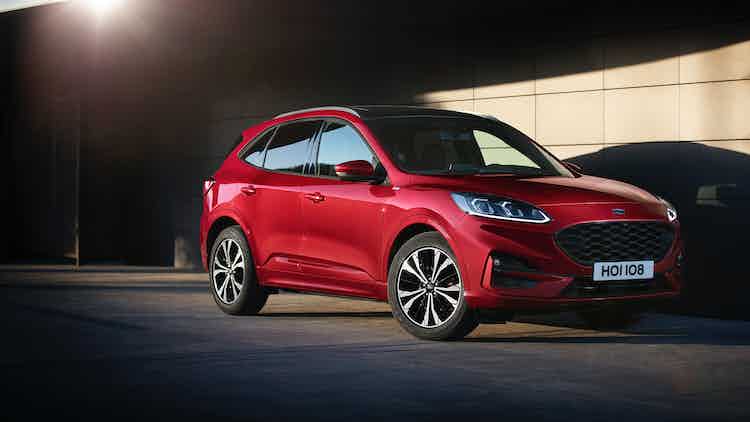 A good selection of colours is available on the Ford Kuga, too, ranging from sensible shades of blacks and silvers to distinctive reds and more out-there hues of blue. To make sure you pick the perfect paint finish for your Ford Kuga, check out our full colour and price guide below.

A decent option if you’re after a less obvious understated colour choice is Blazer Blue. It’s a deep and dark shade of paint that does a good job of disguising dirt, and it’s also a subtle-enough shade to potentially not put off too many used buyers. Being a solid finish, Blazer Blue doesn’t have the same sheen or sparkle as an equivalent metallic or pearlescent finish, though that does mean it’s also easier to touch up if it’s scratched or chipped.

In more ways than one, Frozen White is a solid colour to pick for your Ford Kuga. As well as literally having a solid finish (meaning it doesn’t sparkle like a metallic white would), it’s also a colour that suits the car’s styling well – though, as with all white paints, it makes it very clear to other road users when you haven’t given your car a wash in a while.

As you can clearly see, there’s a noticeable difference between the metallic Chrome Blue and the solid Blazer Blue – whereas the latter could be mistaken for a navy blue, there’s more than a hint of teal in the former. Despite that, it’s still a fairly dark and subtle colour, which means it should be straightforward to keep looking clean, and should still attract the attention of used buyers when you decide to sell the car on.

If you want a new Ford Kuga in black paint, then your only option is the shade of Agate Black you see here. Thankfully, it’s a decent colour to spec on the car – the metallic finish gives it a smart and more upmarket-looking sheen, and it juxtaposes nicely with the Kuga’s shiny grille and silver trim around the side windows. You aren’t limited to certain specs to have this colour, either, as Agate Black can be specified on all of the Ford Kuga’s trim levels.

Another safe colour option that’s worth having on your radar is Solar Silver. As well as being a colour that should appeal to used buyers when you decide to sell the car on, Solar Silver has a snazzy metallic finish that shines nicely in sunlight. Because the colour is also fairly bright, it easily shows up dirt marks, so be brace yourself for frequent car washes if you want your Ford Kuga in Solar Silver looking spick and span.

It’s one of the more expensive colours available on the Ford Kuga, but Magnetic is still a decent option if it ticks the right boxes for you. Being a dark grey, it’s far from an exciting colour, though Magnetic is a safe option that should appeal to used buyers. Plus, the colour is livened up a bit by the sparkly flakes that form the paintwork’s metallic finish.

Most of the colours available on the Ford Kuga aren’t too out there – though if you want something a bit more outlandish, then there’s always Lucid Red. The bright hue and extra sparkle of its metallic finish makes it the most striking colour you can spec on the new Kuga, and means there should be no problems remembering where you left the car in a crowded car park if you pick this colour. Lucid Red’s vividness may make it a bit harder to sell on the used market, though, and it also doesn’t hide dirt marks particularly well.

White Platinum is quite a bit pricier than Glacier White, though the extra money does admittedly get you a more distinctive colour. As well as having a metallic sheen that the solid Glacier White colour lacks, White Platinum is also a multi-coat paint, which gives it more depth and highlights the car’s bodywork contours more. That fancy finish doesn’t stop White Platinum from being just as big a dirt magnet as every other shade of white, though.