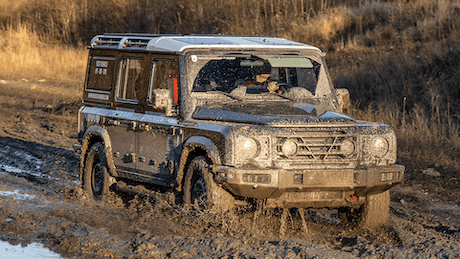 This is the new INEOS Grenadier. It’s inspired by the classic Land Rover Defender, but how does it manage off-road?

Before you question yourself, you’re not looking at a classic Land Rover Defender.

This is the new INEOS Grenadier, an off-roader built by a chemicals company (naturally) that’s inspired by the legendary 4×4. Just look at the bonnet and you’ll see the name as proof.

Though if you’re going to build any car for rugged off-roading, it’s going to look something like this.

From the front, you can see protective panels underneath the car, and it’s got large wheel arches with plenty of travel for the wheels. The 17-inch steel wheels look awesome, but you can also get 18-inch alloys if you’re after some street cred.

The front grille has four slats, with circular headlights and a flat lower step around the bonnet, just like the Defender. You’ll spot functional features dotted all over, tow hoops, roof rails, and you can even get a ladder at the back.

Whereas the exterior is fairly conventional, inside the INEOS Grenadier truly comes into its own. It almost looks like an aircraft cockpit, with a dial and switch panel on the roof, and a chunky centre console with even more dials and switches. They’re all evenly spaced out and stocky, so even with gloves on you’ll still be able to adjust them.

There’s a 12-inch infotainment system in the centre that you can also control with a dial and a rather familiar gear selector. You see, INEOS has plonked in a BMW gear selector. Apparently, it was to keep costs down which is fair enough for a new car company, but it does look a bit out of place.

Overall though, the interior is spacious and functional. All the materials feel durable and you even have the options of Recaro and leather seats. The footwells have plugs, so the floor can be hosed down, and the instrument panels are easy to take apart and customise. Annoyingly, the rear wheel arches eat into the boot and the rear seats can’t be folded flat.

Even from a brief spin in a prototype, it’s clear the Grenadier is clearly a very capable off-roader. Despite its looks, it’s more like a Mercedes G-Class on the move than an old Defender. It’s got all the ingredients for a competent off-road machine. A traditional ladder frame chassis, three locking differentials, and solid beam axles.

You have a pick of two BMW-sourced engines. Both are 3.0 straight-six units, one petrol producing 285hp and 450Nm of torque, plus a diesel with 249hp and 550Nm. Both are connected to an eight-speed automatic torque converter gearbox, with a two-speed transfer box and permanent all-wheel drive.

The driving position is spot on and the visibility is great. However, the near-vertical windscreen and side mirrors cause some serious wind noise and as a result, the top speed is restricted to 100mph.

In what is now quite a crowded segment of dedicated off-roaders, the INEOS Grenadier has the might to compete with the best of them.

Its not-so-subtle nods to the original Defender will be sure to draw some fans in, although its no-compromise approach might not make it the go-to if you’re looking to show off in Mayfair.