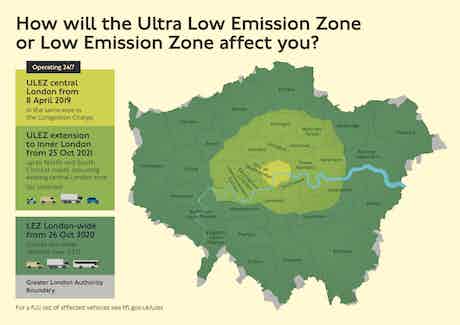 Plans are in place to further expand London’s Ultra Low Emissions Zone (ULEZ) by 2023 to include all of  Greater London. But why is it happening, who’s affected, how much does it cost and where exactly is it enforced? Read on for full details.

What is the London Ultra Low Emissions Zone (ULEZ)?

The London Ultra Low Emissions Zone (ULEZ) was introduced in an effort to improve the quality of the air you breathe in central London by cutting the number of older, higher-polluting cars taking journeys through the capital.

Certain low-emission cars — predominantly electric vehicles — are exempt from paying any fees. If your car isn’t ULEZ compliant, you’ll have to pay a charge for entering the zone. That charge is £12.50 for cars, motorcycles and vans, and £100 for heavier vehicles, including lorries over 3.5 tonnes, plus buses and coaches over 5 tonnes.

The new ULEZ charge runs alongside the Congestion Charge (CC) – which cut private car usage by 39% between 2002 and 2014, according to stats from the London Assembly. However, the ULEZ runs 24/7, 364 days a year (with Christmas Day the sole exemption) rather than operate from 7am to 10pm like the  Congestion Charge.

The idea is to reduce the negative effect on the health of people in London that can be attributed to poor quality air, while also promoting the use of public transport. Amongst other things, the ULEZ aims to limit harmful pollution such as Particulate Matter, NO2 and CO2 gases.

London ULEZ to expand again in 2023

London’s ultra-low emission zone is set to be expanded again in 2023, as mayor Sadiq Khan plans to reduce pollution in the capital. It’s estimated that this could reduce the amount of CO2 emitted in outer London each year by over 135,000 tonnes.

The proposed expansion could see the ULEZ reach as far as Newham, Lewisham, Haringey and Brent, although specific details haven’t been confirmed yet. Drivers may receive support in the form of a scrappage scheme to help them make the switch to a cleaner, less polluting car.

This further expansion is part of a plan to get London to net-zero emissions by 2030. Mayor of London Sadiq Khan has claimed that around 550,000 people in London could develop health problems related to pollution over the next 30 years if nothing is done.

Where is the ULEZ now?

Originally, the ULEZ operated in the same area as the Congestion Charge — as far north as St Pancras, east to Shoreditch, south to Vauxhall and west to Mayfair. As of 25 October 2021 though, the zone has been greatly expanded to the North and South circular roads within the capital. Our handy ULEZ checker shows you the exact boundary of the ULEZ and tells you whether your vehicle is compliant or not.

There’s no physical barrier preventing you from entering the ULEZ, rather it’s well signposted as you approach the zone and policed by hundreds of number-plate reading cameras. If your car isn’t compliant and you don’t pay the entry fee, you’ll find a penalty notice land through your letterbox.

How much does the ULEZ cost?

Eligible cars entering the ULEZ need to pay a £12.50 charge that runs concurrently with the £15 Congestion Charge. The only exception goes to owners of cars registered with ‘disabled’ or ‘disabled passenger vehicles’ tax – they’ll be exempt from paying the ULEZ until 26 October 2025.

London black taxis under 15 years old are also exempt, although any Taxi sold after 1 January 2018 has to be Zero Emission Capable – i.e. able to travel at least 20 miles on electric power alone and produce CO2 emissions of less than 75g/km.

Will I be fined for entering the ULEZ without paying?

If your vehicle is non-compliant with ULEZ standards, you must pay the charge. Failing to do so will result in a fine landing in the post. For cars, this means a £160 charge — though it will be reduced to £80 if it’s paid within 14 days. You can challenge the fine if you feel it has been wrongly issued, however.

Will the ULEZ expand further?

The ULEZ’s last expansion was on 25 October 2021, with it now stretching up to the North- and South-Circular roads. There are currently no plans for it to be expanded beyond that, but that could well change.

Which vehicles are affected by ULEZ?

The ULEZ specifically targets older cars, motorcycles and vans with high emissions. That covers petrol cars that don’t meet Euro 4 emissions standards that came into force in 2005, although some cars built before this were compliant, too.

It is much tougher on diesel cars, however. To be exempt from paying the charge, diesel-powered cars need to meet Euro 6 standards that were introduced in 2015. Non-compliant vehicles under 3.5 tonnes are subject to the £12.50 charge. Large vehicles (categorised as being over 3.5 tonnes for lorries and coaches or buses over 5 tonnes) that do not comply will be subject to a £100 charge each day they enter the ULEZ.

How do I know if my car is exempt from ULEZ?

It’s understandable if you don’t know if your car is is complaint with ULEZ or not, as emissions standards aren’t exactly common knowledge. As a general rule, petrol cars built from September 2009 must comply with Euro 5 standards and should be exempt, while diesel cars from September 2015 needed to meet Euro 6. If you’re still unsure though, TfL does have a checker on its website that’s as simple as entering your registration — so it’s worth a check before heading into the ULEZ for the first time.

Top 10 best company cars in 2022
What is horsepower and why does it matter?
Exclusive: hybrid and electric vehicles are more likely to pass MoT tests than petrols and diesels
Speeding fines and penalties: what you need to know
How to make money by sharing your car
15 cheapest cars to insure in 2022
Peugeot 2008 vs Renault Captur: which one is right for you?
Electric cars versus hydrogen cars: which is better?
How far can an electric car go?
Drag race: Porsche 918 Spyder vs 911 Turbo S
Find the cheapest petrol prices – UK price comparison. PLUS: expert says forecourt prices should be lower
Car cloning explained
Why are used car prices going up?
UK speed camera tolerances explained
Drag race: Ultimate Audi Quattro legends