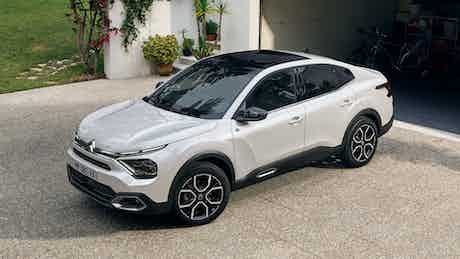 This is the new Citroen e-C4 X. It’s a brand-new coupe-styled electric SUV that’s an alternative to the likes of the Audi Q4 e-tron Sportback and the recently revealed Peugeot e-408.  Read on for full details..

This is your first chance to see the all-new, fully electric Citroen e-C4 X.

It sits in the French brand’s range between the slightly less sleek C4 SUV and the top-of-the-range C5 X and shares plenty of parts with the recently revealed Peugeot 408.

Is it a hatchback? Is it an SUV? Well, the new Citroen e-C4 X is a bit of both. It has a similar front end to the fussy-looking C4 but the side-profile is much sleeker. It’s almost like someone has cut the roof off a four-door coupe and bolted it to the top of the high-riding C4 SUV.

Check out the top 10 new SUVs

This new ‘X’ model also brings a new, more pronounced boot to the C4 range, along with completely different brake lights and a new rear bumper.

The new look is arguably more minimalist than the standard car’s rear end, but it isn’t enough to give the e-C4 X an edge over the tres-chic Peugeot 408 in the style stakes.

The new Citroen e-C4 X’s interior looks very similar to the standard C4’s – in the front seats, at least. You get the same digital driver’s display, large central infotainment screen and a simple dashboard design with a few physical controls for the heating and air conditioning.

Don’t expect the new e-C4 X to have significantly less headroom in the back than the standard car. The added sleekness in the new car’s silhouette has come from extending the rear windscreen backwards rather than lowering the roof itself.

Another side-effect of this change is that the new e-C4 X has a much larger boot than the standard C4. How does 510 litres sound compared with just 380 litres in the ‘normal’ car. That said, it’s still less than the 536 litres of space you get in the new Peugeot 408.

The new Citroen e-C4 X will go on sale exclusively with battery power. This means it comes as standard with a 50kWh battery pack that you can charge using fast 100kW public chargers. That’s the same as the standard Citroen e-C4 electric car.

One of these will boost your range from 10% to 80% full in around half an hour. Charging using the 11kW onboard charger and a wallbox will take between five and seven-and-a-half hours (depending on your wallbox specs.)

Watch this video to see how the latest electric cars compare in a real-world range test.

Once you’ve brimmed the batteries, Citroen says you’ll be able to drive the new e-C4 X for up to 224 miles on a full charge. That’s a smidge more than the 217 miles of claimed range you get in the standard Citroen e-C4.

You don’t get a choice of electric motor with the e-C4 X – it comes as standard with a single 136hp motor that accelerates the car from 0-60mph in 9.7 seconds.

That’s not exactly speedy, but should be more than nippy enough to deal with town driving and occasional motorway trips.

Citroen hasn’t confirmed how much the new e-C4 X will cost, but you can expect it to be a little dearer than the standard e-C4. That car costs from just less than £30,000 and rises to slightly more than £35,000 for a top-spec model.

Don’t be surprised if this larger, more practical e-C4 X model costs a few thousand pounds more than that car across the range. You’ll find out for certain before the car goes on sale in Autumn 2022.

Can’t wait for this new car to go on sale? See how much you can save on a new Citroen e-C4 or check out how easy it is to sell your car with carwow. It’s quick, easy and you’ll be offered a great price. Tap the button below to get started today.