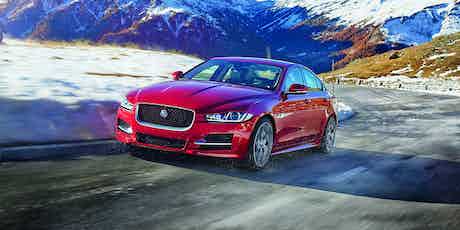 The Jaguar XE has been chipping away at the pedestals of the Mercedes C-Class and Audi A4 since its launch. To give it an even better chance of defeating them in the sales charts, Jaguar has introduced an all-wheel drive option on the most popular diesel engine.

The system is only offered on the 178hp 2.0-litre diesel engine fitted with the eight-speed automatic gearbox. In normal driving conditions, all the engine’s power is sent to the rear wheels as normal but, once the system detects a loss of traction, a clutch pack closes and splits power between the two axles.

As a result, all-weather traction and grip are significantly improved compared to the rear-wheel drive model. The system also uses less fuel and forces less compromise on the handling front by deactivating the front axle when not needed.

Buyers can be reassured the system offers both enhanced traction and improved handling because it was first tested on the F-Type sports car. It works in conjunction with the brand’s ‘Adaptive Surface Response’, which helps detect and tune the car for whatever surface it finds itself on.

Further updates beyond the all-wheel drive system have been introduced to broaden the XE’s appeal. Foremost among this is the company’s InControl infotainment system which is now compatible with the Apple Watch.

By installing the brand’s InControl app on their watch, driver’s can lock and unlock their car, check their fuel level, set the climate control and even start the car all before they’ve even stepped inside. An optional Meridian sound system further enhances the car’s infotainment package.

Save money on your new Jaguar XE

If you’re sold on this suave British saloon, put the Jaguar XE in our car configurator to see how much carwow could help you save. For more options, head over to our deals page or, if you need more help selecting the car you’d like, check out our car chooser.