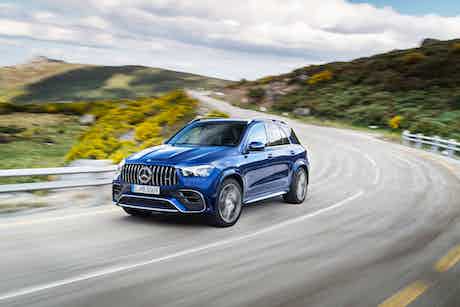 The 612hp Mercedes-AMG GLE63 has been revealed at the LA motor show. Here’s everything you need to know.

The Mercedes-AMG GLE 63 has enough visual muscle to compete in a Mr Universe competition. There’s a massive vertical-runged grille and a lower bumper with huge vents that feed air to the intercoolers. You also get 20-inch alloy wheels, with 22-inch alloys an option.[angle from behind], while those flared wheel arches give the car the bulk of a stocky heavyweight boxer.

The GLE 63 is powered by a twin-turbocharged V8 pumping out 571hp and 750Nm through a nine-speed automatic gearbox. The version you really want, though, is the GLE 63 S. This makes 612hp and 850Nm of torque – enough to get the SUV from 0-60 in 3.8 seconds, just as quick as the BMW X5 M Competition. Unfortunately, the BMW wins ultimate bragging rights – it has a top speed of 180mph, while the Mercedes is all out of puff at a measly 174mph.

Inside, you get body-hugging AMG-embossed sports seats, a flat-bottomed steering wheel trimmed in nappa leather and a pair of aluminium pedals. You also get an AMG-specific centre console with controls for the car’s stability control, gearbox and suspension. If you want to jazz things up a bit, you can always swap the standard aluminium trims for expensive-looking carbon fibre finishes.

The GLE 63 is also a hybrid with a 22hp electric motor that can add a slug of extra oomph under acceleration. The car’s 48V power supply also means you can coast on the motorway and to a stop, to help save fuel. Even the petrol engine does its bit: it can switch off half its cylinders when their extra power isn’t needed. Yet despite all this, you’ll be lucky to see fuel economy of 25mpg, and quite a lot less than that with a heavy right foot.

The GLE 63 comes with cosseting air-suspension that makes even the worst of roads feel butter smooth, and you can lift the car’s body by up to 55mm for serious off-roading. In corners you can call on the car’s AMG Active Ride Control roll stabilisation. It uses fast-acting electronic actuators to firm up the car’s suspension through bends – allowing it to corner like an Olympic skier slicing through a slalom course.

As standard the GLE 63 gets six-piston brake calipers at the front biting down onto 400mm brake discs – though the single piston calipers at the back don’t sound quite so encouraging. That said, you can boost braking performance by going for the optional carbon ceramic brake discs, which will resist fade after hard use on track. They’re easily spotted by their bronze coloured calipers.

Helping the GLE 63 gets its power down with as little fuss as possible is its standard four-wheel-drive system. It sends most of the V8 engine’s power to the rear wheels, making the big SUV feel more like a sports saloon in corners. Mash your foot to the floor, though, and power is sent to the front wheels, while a standard limited-slip differential at the back ensures good traction off the line.

You can set up your GLE 63 for everything from pounding around a racetrack to roaming sand dunes or, more likely, to just get you home from work as comfortably as possible. In total, the Dynamic Select system has seven separate modes. These include an Individual setting, which lets you adjust the suspension, throttle, gearbox and steering exactly how you want.

The GLE 63’s infotainment screen has extra features you don’t get in the standard car, including a Supersport mode. It gives you info on things like engine and gearbox temps, power and torque, and even includes a G meter so you know exactly how hard you’re cornering. The system also includes a Race Timer stopwatch that can record lap and sector times if, for some reason, you decide to take your 2.5 tonne SUV on a race track…