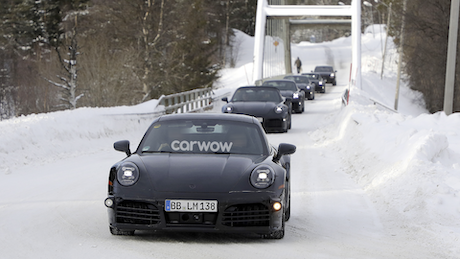 The updated Porsche 911 has been spotted testing, and there’s going to be a high-performance hybrid version. Read on to find out more…

The iconic Porsche 911 will soon be available as a performance-focussed hybrid, the firm confirmed during its 2022 annual press conference. An updated 911 Cabriolet is also on the way.

This new high-performance alternative to the likes of the McLaren Artura and Ferrari 296 GTB is expected to go on sale in the next few years following revised versions of the standard pure-petrol 911 from the entry-level Carrera to the range-topping Turbo S.

The new Porsche 911 hybrid was confirmed by Porsche’s Chief Executive Officer – Oliver Blume – during the firm’s annual press conference. However, prototypes of a new electrified 911 sportscar have already been spotted undergoing testing (shown below).

This prototype (identifiable as a hybrid by the yellow sticker on the rear windscreen) appears to be based on the latest Turbo S model. This suggests you’re looking at a performance hybrid in the same vein as the Cayenne and Panamera Turbo S E-Hybrid models.

It’s thought the Porsche 911 Turbo S Hybrid will use the same 3.8-litre twin-turbo flat-six as the standard car but could also feature a 136hp electric motor (just like other hybrid Porsches) to produce a total of between 700hp and 800hp.

Although the new hybrid will likely be heavier than the normal 911 Turbo S, it should match, and possibly beat, that car’s impressive 0-60mph time of 2.7 seconds.

This new Porsche 911 looks set for some subtle tweaks, but nothing drastic. If it isn’t broken, why fix it?

At the front, you’ll spot larger air intakes compared with the existing car integrated within the bumper. The thin daytime running lights have disappeared, but don’t expect those to be replaced with the tacked-on sidelights of these prototypes — those are almost certainly for prototype use only.

A revised rear bumper sees the exhaust brought inwards towards the centre with the number plate now mounted higher up compared with today’s Carrera models.

The new Porsche 911 Cabriolet has also been spotted testing. It’ll look very similar to the coupe, with the same twin-exit exhausts and larger air intakes. It will retain the fabric roof from the current car as well. You’ll be able to get the Cabriolet in both Turbo and Turbo S models, as potentially as a future hybrid version.

No pictures have been revealed yet of the updated Porsche 911’s interior, but don’t expect any major changes.

It’s likely that there will be some new trim options and updated infotainment on offer. Plus there may be some new displays in the gauge cluster hybrid 911s.

The updated Porsche 911 is expected to use the same suite of engines as today’s car. Carrera models are likely to be the first to be introduced, followed by Turbo models and eventually an updated GT3.

The upcoming 911 Carrera models will likely retain the current car’s 3.0-litre turbocharged flat-six engine, though power may be nudged up from its current 385hp to possibly more than 400hp.

The 911 GT3 could see a tweaked version of its 4.0-litre naturally-aspirated flat-six for more power too, with an increase also possible for the 3.8-litre twin-turbo unit found in the 911 Turbo and Turbo S models. A new hybrid version of the Turbo S range topper could be on the way, too.

No pricing information has been revealed yet, but it’s likely to cost more than the current car. Expect pricing to kick off from around £90,000 for entry-level cars and rise north of £180,000 for the Turbo S hybrid.

Can’t wait for the new Porsche 911? Check out the review of the 911 range or see the best sports cars on sale today