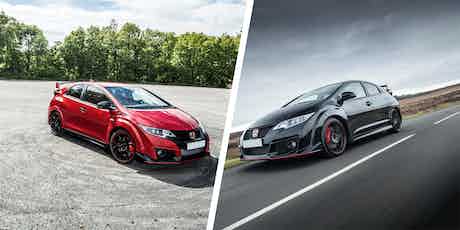 We compare the new Honda Civic Type R Black Edition to the standard car. Only 100 will be built so it’ll be a sure-fire collector’s item…

Honda has created the Type R Black Edition mega-hatch to commemorate the current Civic Type R production coming to an end. Read on to find out how this new limited edition model compares to its standard sibling.

The Standard Type R has a bit of a boy-racer vibe thanks to its large spoiler, aggressive front bumper and styling that screams “get out of my way!” To some, this may be offputting but many Type R buyers love its shamelessly sporty aesthetic. Red trim around the bumper and on on the wheels let passers-by know this is no ordinary Civic hatchback.

For the Black Edition, Honda has added a black paintjob and even more red touches. Red rear wing end plates on the spoiler help the keen-eyed car spotter separate this car from the standard model and give it an even more menacing appearance.

The Civic Type R’s interior screams sportiness with colourful trim pieces scattered about the cabin. Honda has taken a – dare we say – slightly more conservative approach to the Type R Black Edition. It retains a number of the standard car’s red trim but adds a more subdued selection of black parts, too. This is especially noticeable on the newly retrimmed front seats.

The Type R Black Edition is on sale now priced from £32,300. Being limited to just 100 units, however, you’ll have to act fast to park one on your driveway. If your budget can’t stretch to this limited edition model, the standard Type R still makes for a fairly exclusive hot hatch – Honda states there are just 2,500 currently on UK roads.