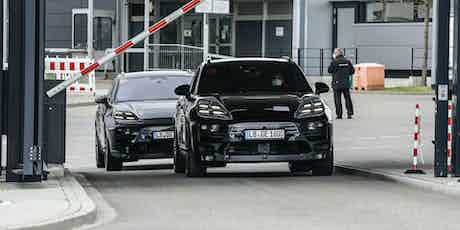 The new all-electric Porsche Macan has been teased in official photos from Porsche. Read on to get the inside story on this long-awaited electric SUV.

After months of speculation, Porsche has finally released official teaser images and further details on the upcoming Porsche Macan EV. This will be the German auto manufacturer’s first electric SUV and is set to be an alternative to the likes of the Mercedes EQC and BMW iX3 when it goes on sale in 2023.

Visually, the Macan EV will retain many of the current model’s design cues and will be very similar in size, although it will be built using all-new components shared with the likes of the upcoming Audi A6 e-tron.

As you can see in these official teaser photos, the Macan EV features Taycan-esque headlights, a more aggressively styled front spoiler and redesigned taillights. The rear bumpers house faux-exhaust outlets but these will almost certainly be removed before production.

The Porsche Macan EV was recently spied in clay model form amongst some very interesting design studies such as the Porsche 919 Street, a road-going LMP1 concept. While the Macan EV may not be destined for track days, it is undoubtedly going to be one of the sportiest electric SUVs when it arrives in the coming years.

This clay model shows that the new car will look similar to today’s Macan and feature an evolution of that car’s hunkered-down stance and coupe-like profile.

One area where the two differ is in the front. The electric car features a less prominent grille with a wide opening below the bumper flanked by two cut outs that will probably house a pair of LED fog lights.

Porsche has not yet revealed what the Macan EV interior will look like and the image of the digital setup they use to test the driver’s environment (above) reveals very little.

A two-tiered touchscreen layout as seen in the Taycan is possible, but there’s also a chance Porsche will stick to the single central screen layout it already uses in the Porsche Cayenne and Panamera.

A fully configurable digital dashboard will be on offer and you can expect some kind of augmented-reality head-up display system to feature in the options list, too.

The flat floor afforded by the new Macan EV’s electric drive system should make sure there’s plenty of passenger and boot space, possibly eclipsing that in today’s petrol-powered Macan.

Utilising the new PPE (Premium Platform Electric) underpinings jointly developed with Audi, the Porsche Macan EV will likely be offered with both rear- and four-wheel-drive options as well as a range of battery capacities.

There is no official info just yet on the new Macan EV’s specs, but the upcoming Audi A6 e-tron, which uses these shared underpinnings, will produce 476hp and 800nm of torque in dual-motor format, which gives it a sub-4-second 0-60mph time.

Get all the info on the new A6 e-tron

A similar setup may also be used for the Porsche Macan EV, while a cheaper rear-wheel-drive version with a single electric motor should also be made available.

The Audi A6 e-tron will debut with a 100kWh battery pack and a range-topping Porsche Macan EV may well be offered with a similar capacity battery. In this configuration the A6 e-tron has 435 miles of range although it remains to be seen whether the Macan EV will be capable of the same figure.

The Porsche Macan’s 800-volt electrical system will be compatible with 270kW chargers which means versions fitted with a 100kWh battery can be charged from 0-75% in just 25 minutes. If you’re pressed for time, a 10-minute charge will yield an additional 186 miles of range.

Porsche has announced that the Macan EV will be launched in 2023. It will initially be sold alongside the petrol-powered Macan and pricing for the dual motor variant should be comparable to the £70,000 range-topping Porsche Macan Turbo.

Can’t wait for this new car to go on sale? Check out the top 10 electric cars on sale or compare the best SUV deals available through carwow.