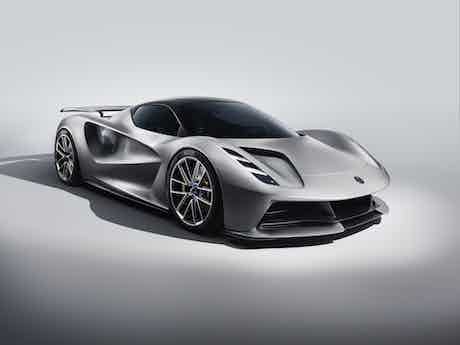 Lotus has unveiled its new, all-electric Evija. Putting out 2,000hp and going from 0-60mph in less than three seconds, here’s everything you need to know about this vicious hypercar.

The Lotus Evija is the world’s fastest all-electric hypercar and is limited to just 130 units. As such, it has a very, very, very hefty price tag of £1.7 million (before taxes). It’s available to order now – provided you lay down an eye-watering £250,000 deposit – with production beginning at some point next year.

As a 2,000hp hypercar that gets to 60mph from a standstill in less than three seconds, the Evija is obviously designed for pure speed (as well as cornering grip). Its styling certainly reflects that, with the entire bodykit being built from lightweight carbon fibre while also having a ground clearance of only 105mm. Good luck getting that over a sleeping policeman. Despite this, it is still technically a road car.

One of the Evija’s most striking visual elements is its air vents. The front end has a multitude of enormous ones, designed to get as much air to the battery, motors and tyres as possible. The rear is even more extreme, with the Lotus badge being flanked by two huge, drag-reducing tunnels, apparently inspired by Le Mans racing cars. If their sheer size alone isn’t enough to attract your attention, don’t worry: they’re each framed by a bright red LED light. Below them are even more intakes, separated by a crimson, vertical, LED strip.

The Evija’s back end also has an active spoiler. While you’re driving, you can press the “DRS” button on the steering wheel to flatten it out for some straight-line speed. However, if you press down on the brake pedal, it tilts ninety degrees upwards, acting as an air brake.

At the side, the Lotus’ front wheels are 20 inches in diameter, while the rear ones are 21 inches. To save weight, they’re all made from magnesium. Meanwhile, the doors look like they’ve been attacked by a particularly slash-happy samurai. Lotus calls this ‘design porosity’; everyone else says it gives the Evija’s body more holes than the plot of The Dark Knight Rises.

You’ll also notice that the doors don’t have mirrors. This is an attempt to reduce drag, with cameras built into the roof and front wings taking their place to provide you with a rear view on the car’s infotainment screen.

The Evija is Lotus’s first road car to have a chassis completely made of carbon fibre. Not only does it promise that the car’s underpinnings are extremely rigid, but it’s also lightweight, making the Evija the least heavy all-electric hypercar in the world.

Each axle in the Evija’s pushrod suspension is fitted with three adaptive dampers. Two of them control how much the car leans in bends; the third keeps it steady while accelerating and braking.

The Evija is the first all-electric British hypercar. It’s powered by a 2,000kW lithium-ion battery, which is situated in the middle of the car, behind the passenger seat, to optimise weight distribution. This battery gives the Evija a ludicrously large power output of 2,000hp, alongside an equally impressive 1,700Nm of torque. Altogether, this means that the car is able to go from 0-60mph in less than three seconds, before hitting a top speed above 200mph. However, these are figures estimated by Lotus, since mass production is still some way away.

Another of Lotus’ claims for the Evija is that its battery will have a range of 250 miles. The manufacturer also says that an 800kW charger will recharge it from flat to full in just nine minutes. That’s fine and dandy – until you realise that 800kW chargers don’t exist. As a result, in reality, no one really knows how long it will take to charge the Evija.

On the bright side, the Evija has one of the most high-tech four-wheel-drive systems going. It’s capable of automatically sending power to two, three or four wheels in an instant, giving the Lotus the almighty ability to break the laws of physics while cornering. Or something.

The Evija’s interior continues the minimalist-yet-high-tech racer look that you find on the outside. Its rounded-rectangular steering wheel is reminiscent of a Formula 1 car’s, while the thin centre console is caked in hexagonal buttons. The infotainment is comprised of a singular, large, digital driver’s display. It features a chronograph, allowing you to record lap times, and can connect to the Lotus app. This lets you check the Evija’s battery charge or even control its air conditioning on your smartphone.

Bookmark this page to stay up to date on the Lotus Evija.