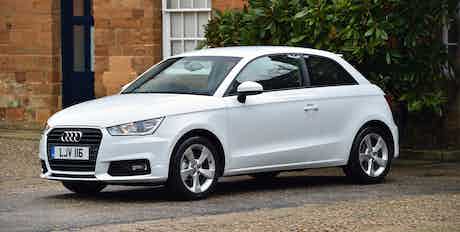 Audi equips the A1 premium supermini with a 67mpg-rated three cylinder petrol engine, prices start at £14,315 for the 2015 model

Audi has treated it’s smart A1 supermini to some mid-life tweaks, including the introduction of a new entry-level petrol engine with CO2 emissions of just 97g/km.

The 1.0-litre turbocharged unit is also used in the Volkswagen Polo, though its introduction to the A1 is the first time a three-cylinder petrol engine has been fitted to an Audi. It replaces the old 1.2-litre four cylinder lump, and is both more powerful (94hp vs 85hp) and more economical (67.3mpg vs 55mpg). Where the old 1.2 used to cost £30 per year to tax, the ultra-low emissions of the three cylinder mean that road tax is now free – thanks to its sub-100g/km CO2 emissions.

Performance is reasonable for an entry-level model. The 0-62mph sprint takes 10.9 seconds, and it’ll reach a top speed of 116mph. A dual-clutch automatic gearbox is available as an optional extra, too. It returns the same performance figures, but fuel economy drops to a claimed 64.2mpg.

Meanwhile, the A1’s 1.6-litre TDI diesel version has been revised to deliver better fuel economy. The turbo diesel engine can officially return 6.4mpg more than before, taking its claimed fuel economy to an impressive 80.7mpg.

Both the 1.0-litre petrol and 1.6-litre diesel engines are available in the three- and five-door (Sportback) body styles, and in SE and Sport trim levels. Standard kit in the SE model includes everything you’d hope for from a premium supermini: alloy wheels, air conditioning and iPod connectivity via a 6.5-inch display on the dash are all available.

The Sport model gains an “Audi Music Interface” which allows you to control Apple devices directly through the audio system. Other standard kit remains the same as before, though answering to criticisms of the A1’s ride, Audi has tweaked the sport suspension to deliver a little extra compliancy – good news for anyone driving on rutted UK roads.

As is common with cars in this segment, a decent range of personalisation options is available to buyers. The roof can be finished in a range of contrasting colours (a glass panoramic option is also available), while certain pieces of interior trim can now be finished in a more eye-catching red, white or yellow finish. The A1 still can’t quite offer the same level of customisation options possible with the Citroen DS3, but it’s a start.