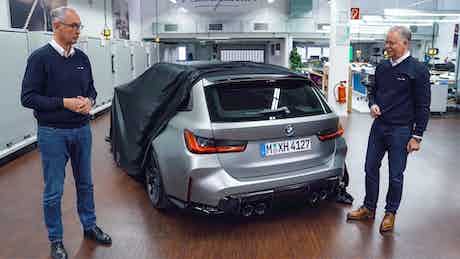 BMW has partially revealed the all-new M3 Touring estate’s design before the finished car makes its public debut later this year and goes on sale before 2023.

The BMW M3 Touring has been teased in a video from BMW’s M division before the finished high-performance estate car makes its official debut later in 2022.

This long-awaited alternative to the Audi RS4 Avant and Mercedes-AMG C63 Estate will be based on the existing BMW M3 Saloon and should go on sale before 2023.

The BMW M3 Touring was announced back in September 2020, but these new teasers give you your best look yet at this fast estate. It features the same boxy rear end as the standard BMW 3 Series Touring with obvious M-tuned additions.

See the latest savings on a 3 Series Touring

BMW hasn’t revealed the front of the new M3 Touring yet, but it’s expected to look almost identical to the standard BMW M3.

These exclusive renderings (above and below) gave you a clear idea of what the finished high-performance Touring will look like when the covers come off. Yes, it’s expected to retain that divisive buck-toothed grille.

You’ll have to wait a little longer to see the finished car unveiled in full.

Under the bonnet, the new M3 Touring will use the same 3.0-litre turbocharged straight-six engine found in the M3 saloon and M4 Coupe.

It’ll produce 480hp in standard guise and 510hp in Competition trim, with these more powerful models getting an 8-speed automatic transmission and all-wheel drive as standard.

If the M3 Touring is offered in standard non-Competition spec, it’ll come with a six-speed manual gearbox as standard, with the option to pay extra for an eight-speed automatic gearbox.

If BMW decides to only sell Competition versions of the new M3 Touring in the UK (as it does with the standard M3 saloon and M4 Coupe), then every car will come with this automatic gearbox as standard.

As with the standard M3 saloon and M4 Coupe, the new M3 Touring is expected to come with the option of rear-wheel drive and four-wheel drive.

In the case of the standard M3 saloon and M4 Coupe, these xDrive-equipped cars come exclusively with an automatic gearbox.

Previous images posted to Instagram by BMW’s M division show an M3 Touring with a large banner on its side featuring the phrase ‘B’ring it on’ beside an outline of the Nurburgring racetrack.

This could indicate that BMW is aiming at setting a new estate car lap record around the famous race track.

The large alloy wheels on this prototype indicate that it is likely the more powerful 510hp Competition variant. Equipped with a quick 8-speed automatic and all-wheel drive, it will be well-placed to take the title away from the Mercedes-AMG E63 Estate which currently holds the estate car record at 7.45:19.

The BMW M3 Touring won’t make its debut until later in 2022. It’s expected to set you back a few thousand pounds more than an equivalent M3, which costs from £75,000 in Competition trim.

As with the M3 and M4, it’s most likely that UK cars will come exclusively in Competition guise – that means you’ll get 510hp, all-wheel drive and an eight-speed automatic gearbox as standard.

If you can’t wait for the new M3 Touring to go on sale, read our BMW M3 review or compare the top 10 estate cars on sale.