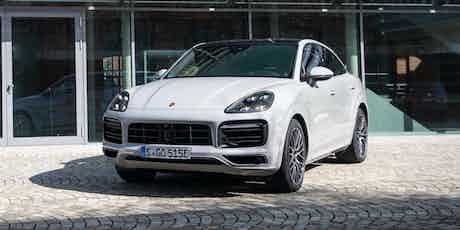 The Porsche Cayenne and Cayenne Coupe E-hybrid models have been upgraded with more powerful batteries, boosting the distance they can drive on electricity alone. Battery capacity jumps 30% from 14.1kWh to 17.9kWh.

As a result, the new Cayenne E-Hybrid has an electric-only range of 29.8 miles, which is around five miles further than the outgoing car. The more powerful Cayenne Turbo S E-Hybrid can manage 26.1 miles – seven miles more than the previous model.

The electric motor that’s fitted to all Porsche’s Cayenne E-Hybrid models produces 136hp and 400Nm of torque. In the regular E-Hybrid, it is teamed with a turbocharged, 3.0-litre V6 petrol engine to produce a total of 462hp.

The Turbo S E-Hybrid has a twin-turbo, 4.0-litre V8 engine that produces 550hp by itself. Add in the electric motor and you get a whopping 680hp on tap. That’s the same as the current car, mind.

In all Cayenne and Cayenne coupe E-Hybrid models, the engine acts as a generator to top up the battery when it runs out of charge. Porsche has modified the system so that it now only tops the batteries up to an 80% full. Above 80%, the rate of charge slows significantly, reducing the efficiency of the engine, so you’d be better off plugging it in to charge up the remaining 20%.

New Cayenne E-Hybrid models can be recharged at home using a 3kW plug socket or by using a 7.2kW public charging point. You can also use the Porsche Mobile Charger Connection app to set a time that your car’s charging will finish, so it’ll always be ready in time for your morning commute.

The new Porsche Cayenne’s extended electric range also boosts its fuel economy figures. According to the new WLTP testing procedure, the new Cayenne E-Hybrid returns a claimed 76-91 mpg, compared with the outgoing car’s 52-72 mpg. The more powerful Turbo S E-Hybrid sees a similar improvement – it’s fuel economy has been upped from 52-58mpg to 69-74 mpg. You’ll have to charge the car’s batteries at every opportunity to get close to these figures, however.