May 24, 2016 by Alex Ingram and Nick Lette van Oostvoorne 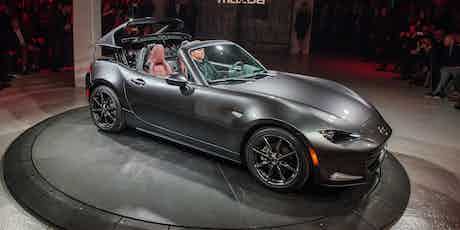 The Mazda MX-5 RF gains an electically folding hard top roof, and is making its first European appearance at the Goodwood Festival of Speed

The Mazda MX-5 RF will make its European debut at the 2016 Goodwood Festival of Speed, which runs from 23-26 June. The Japanese two-seat sports car passed one million sales in April this year, and the release of this metal-roofed version shows that there’s little sign of its success slowing down any time soon.

If you’re after a great little sports car but don’t mind the fabric roof, you could get a great deal using our Mazda MX-5 car configurator.

In place of the MX-5’s regular fabric hood is a metal roof panel held above the driver by two buttresses that slope downwards towards the rear of the car. A flick of a switch lifts the buttresses upwards and rearwards and the roof panel retracts into the boot. It takes just 12 seconds and operates at speeds up to 6mph. The metal panel doesn’t take up any more boot space than the regular fabric one, with volume remaining at 130 litres.

Though Mazda has yet to release official figures, the extra metalwork will add a few kilos to the current MX-5’s lightweight figure, though the brand claims the car still has its perfect 50:50 weight distribution front to rear.

To give it a slightly more refined feeling than the regular MX-5, the RF gains extra sound deadening and suspension tweaks intended to improve comfort. Continuing the more relaxing nature, a six-speed automatic gearbox is offered exclusively to RF customers. A manual gearbox remains the standard choice, paired with either the 130hp 1.5 or 160hp 2.0-litre petrol engines used across the rest of the MX-5 range.

Prices are yet to be confirmed, but the RF is expected to cost around £2,500 more than the equivalent soft-top MX-5. It’ll go on sales in early 2017.

Mazda has announced its MX-5 sports car will be displayed with a new retractable hardtop at the 2016 New York Auto Show. Read our complete guide to find out how this new model differs from its soft top sibling…

If you’re after a great little sports car but don’t mind the fabric roof, you could get a great deal using our Mazda MX-5 car configurator.

Mazda has confirmed this new version of the MX-5 will be called the ‘RF’ meaning ‘retractable fastback’ – a term often used to describe the sloping rear roofline of many coupes.

Contrasting black inserts behind the side windows make the RF look streamlined and stylish and help disguise the size of the new roof panels. Mazda has chosen to fit a small square rear window between the rear buttresses in place of a large glass screen that stretches from the roof to the tail. This has allowed the rear boot lid to be kept standard and not be replaced by a large opening hatch – reducing production costs.

The roof can be folded automatically at speeds up to 6mph – the central section is stowed in the boot when the roof is folded away but the MX-5 RF retains the same storage capacity as the standard convertible. The interior doesn’t receive any modifications, however, and both the front and rear bumpers are the same as the standard soft top model.

The RF will be available in Europe with the same 130hp 1.5-litre and 160hp 2.0-litre petrol engines, but buyers will be able to choose a six-speed automatic gearbox for the first time, reflecting the RF’s slightly softer nature. The excellent six-speed manual gearbox will still be fitted as standard, however.

A new paint colour, Machine Grey, will make its debut on the MX-5 RF before being available on many other models in the Mazda range. This finish features metallic flakes in a special pattern to emphasise the car’s curves in the light. The MX-5 RF will be displayed at the 2016 New York Auto Show where we hope release dates and prices will be announced.

Save money on your Mazda MX-5

If you can’t wait for the RF to go on sale, you could get a great price for a new Mazda MX-5 by using our car configurator. If you’re not sure which car to buy, read our best convertible sports cars article or check out our car chooser tool.